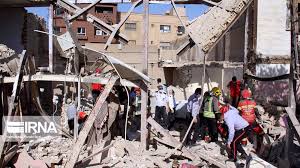 DUBAI — A suspected gas explosion flattened a building and shops in a marketplace in southwest Iran on Sunday, killing at least five people, a fire official said, in the latest in a series of fires and blasts, some of which have hit sensitive sites.

State television showed rescue teams looking for survivors in the rubble of the two-storey residential building located near a historic marketplace in the old district of the city of Ahvaz, capital of oil-rich Khuzestan province.

Four men and one woman were killed and nine people were injured, Qanbari said.

Some of the explosions in the past few months appeared to be linked to Iran’s deteriorating infrastructure, while others may have been security-related such as blasts at sensitive military and nuclear sites.