SCHENECTADY, United States of America — Whitepaper on energy transition builds on GE’s (www.GE.com) commitment to carbon neutrality in its operations by 2030 and announced intention to exit the new-build coal power market [1]; renewables supported by gas-fired power and ongoing coal-to-gas conversion most impactful way to reduce carbon emissions in near term; multiple pathways to operate with low or zero-carbon emissions through gas-fired offerings including through hydrogen and carbon capture technologies; new customer agreements with Uniper and Long Ridge Energy Center highlight role of gas in decarbonization. 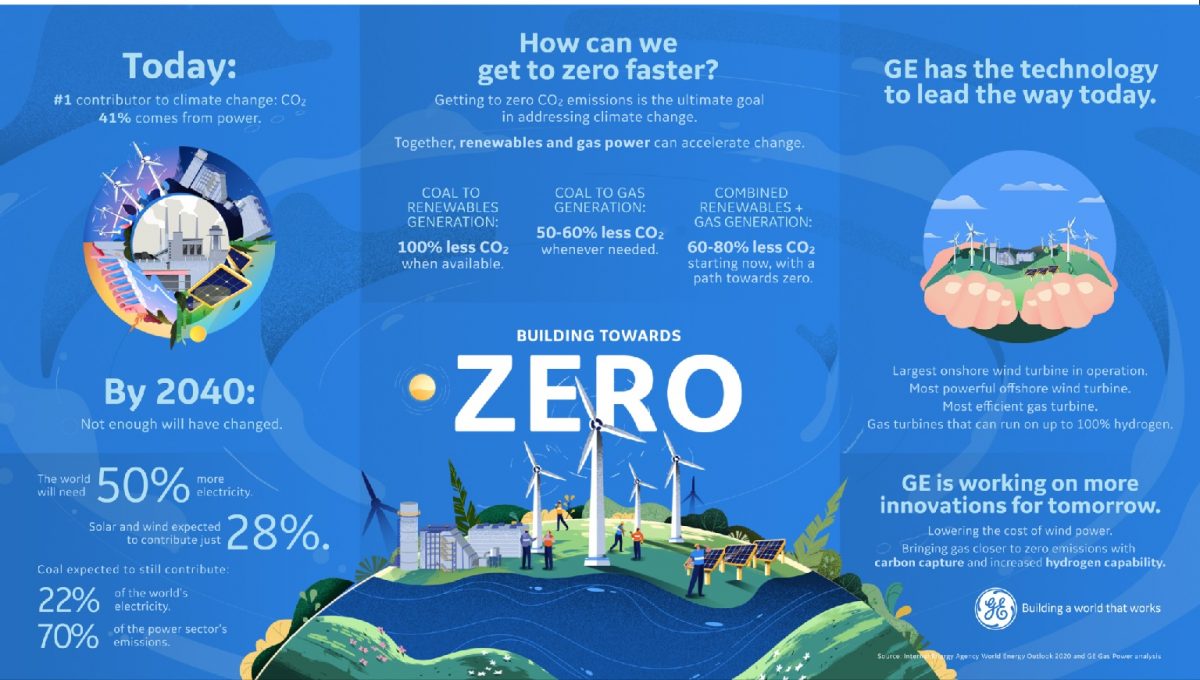 Building on its commitment to carbon neutrality in its operations by 2030 and announced intention to exit the new-build coal power market, GE (NYSE: GE) today shared its position that the accelerated and strategic deployment of both renewable energy and gas power can make substantial progress in combatting climate change in the near-term, while securing a path to a lower-carbon emitting world in the future.

In a newly published paper (http://invent.ge/2J6CSQY) expanding on its decades-long commitment to decarbonization titled “Accelerated Growth of Renewables and Gas Power Can Rapidly Change the Trajectory on Climate Change,” GE said neither power source will be sufficient alone; however, deployed in tandem, they can provide decarbonization at the pace and scale needed to help achieve substantial climate goals.

In addition, the paper outlines multiple technical pathways for gas power to achieve a lower-carbon generating footprint through the use of low and zero-carbon fuels—including hydrogen—as well as carbon capture utilization and sequestration (CCUS) technologies.

“Addressing climate change is an urgent global priority and one that we think we can do a better job of accelerating progress on—starting now—not decades from now,” said Scott Strazik, CEO of GE Gas Power. “We believe there are critical and meaningful roles for both gas power and renewable sources of energy to play, advancing global progress faster today with coal-to-gas switching while continuing to develop multiple pathways for low-to-zero carbon gas technologies in the future.”

To help meet urgent climate goals while at the same time increasing power demand across the globe, the report details the merits of gas-fired generation as a complement to support and accelerate renewable energy penetration:

Gas is reliable, inexpensive, and doesn’t require a lot of land; the ideal complement to renewable energy.
While renewable power is variable, gas power is dispatchable, dependable and flexible, available as much as 90% of the time.
The near-term impact of coal-to-gas switching represents a fast and effective win for emissions reduction in many regions around the world. For example, since 2007, power sector CO2 emissions in the United States have dropped by about one third while total electricity generation has remained fairly constant. The CO2 emissions reduction attributed to coal-to-gas switching was greater than that from any other fuel source.
The position paper released today provides technology and market overviews of several sources of power generation including renewables, gas, coal and nuclear as well as technology breakthroughs needed to make battery storage more cost-competitive.

“With more than 125 years of experience across the electricity industry, GE is well-positioned alongside our customers to continue to lead the way and drive the future of energy,” said Vic Abate, GE Senior Vice President and Chief Technology Officer and former CEO of both GE’s Gas Power and Renewables businesses. “We’re prioritizing investment in technologies to cost-effectively scale renewables and to move toward net zero gas power with advances in hydrogen and carbon capture technologies. Together, the combination of renewables and gas can help lead an energy transition that enables us to achieve greater carbon emissions reductions faster compared to renewables alone.”

GE Renewable Energy is continuing to invest in technology innovations that are driving down the cost of renewable energy, a key driver of the industry’s continued growth as noted in the whitepaper. The company recently announced that its Haliade-X offshore wind turbine, the most powerful turbine in operation today, will be uprated to 13 MW as part of the first two phases of the Dogger Bank offshore wind farm in the UK.