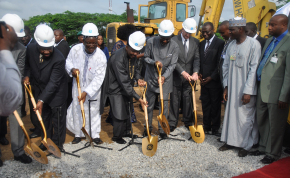 05 December 2014, Sweetcrude, Houston – Following the recent announcement of a contractor for the construction of the GE manufacturing and assembly facility in Calabar, GE has taken further steps to ensure that the suppliers servicing the facility have the financial muscle to do so. To this end GE has signed framework agreements with 5 Nigerian banks that will provide up to $500million in total financing to the suppliers. The aim is to have a financing program that provides favorable financing terms with GE support. Each of the financing institutions will provide a line of credit from $50m up to $100 million. The banks include Fidelity Bank, Citibank, Zenith Bank, UBA and Ecobank. In addition GE is working with the Nigerian Content Development Fund (a subsidiary of the NCDMB) to provide further financing options and enhancements.

Speaking at a brief ceremony in Abuja, the President and CEO of GE Nigeria Dr. Lazarus Angbazo said the move represents a watershed in supplier financing and efforts to boost government’s local content policy in the Oil and Gas and other sectors. He said the suppliers that have been pre-qualified and would benefit from this loan facility are new and established Nigerian companies. GE will use its substantial purchasing volume to underpin the banks and their financing facilities. According Dr. Angbazo “with the investments in the Calabar plant, GE plans to significantly increase its supplier base from 40 local suppliers to 100 within the next 5 years”. Dr Angbazo added that GE will continue to support SME suppliers with Supplier Business Development Services and Technical Development Support to assist suppliers in meeting GE global supplier qualification criteria.

Dr. Olusegun Aganga; Honourable Minister of Industry, Trade and Investments, chaired the event and praised the parties for their focus on stimulating industrial growth in Nigeria. He called for even more creativity out of the Nigerian financial services industry “to bring the same range of competitive financial products for small businesses as exist across the globe.”

On his part, the Executive Secretary of the Nigerian Content Development and Monitoring Board, Dr Ernest Nwapa commended GE for the initiative which he said would result in job creation, skill and technology transfer. Dr Nwapa noted that this was another important scorecard for efforts by the present administration to ensure that Nigerian companies directly benefit from the foreign direct investment in the country. GE’s financing partners who spoke at the event commended the efforts to support the growth of small and medium size enterprises noting that they were proud to be part of the GE initiative. On his part, the GE Africa CFO, Thomas Konditi, noted that this program leads the way in GE’s efforts to promote SME growth across Africa. He also noted that the facilities will be available in 2015 after final structuring of the terms and conditions for each bank and agency.

GE plans to invest over $1billion in Nigeria over a 5-year period; $250million will be in capital expenditure for the Calabar plant while about $800 million incremental spend will be on local sourcing of goods/services, labour, staff welfare and training. This is GE’s biggest investment announced in Sub Saharan Africa to date, and only the second of its kind in the region. This investment is aimed at strengthening GE’s local presence with the new service and manufacturing facility in Calabar, as well as an additional investment in its service workshops at Port Harcourt and Onne.

About GE
GE (NYSE: GE) works on things that matter, using the best people and the best technologies taking on the toughest challenges, finding solutions in energy, health and home, transport and finance, building, powering, moving and curing the world. Not just imagining. Doing. GE works.