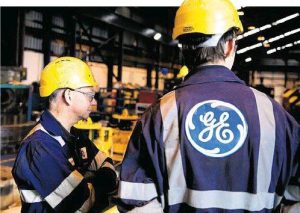 The company said the exit from the business could include divestitures, site closings and job cuts, while it works with its customers to complete existing obligations.

GE has said in the past it would focus less on fossil fuels and more on renewable energy, reflecting a growing acceptance of clean power sources by utilities.

“GE’s exit from building new coal-fired power — after decades as a leader in this space — is an acknowledgement that growth in the energy sector will no longer be in coal,” said Kathy Hipple, a financial analyst at Institute for Energy Economics and Financial Analysis. “The market will ultimately reward GE for exiting new coal builds.”

The move also makes GE’s portfolio more ESG (environment, social and governance) centric, according to Wolfe Research analyst Nigel Coe, with the coal and steam equipment business being relatively small at about $1 billion of its annual revenues.

Shares of the company that also makes aircraft engines tumbled about 9% on Monday, which analysts said was unrelated to the announcement.

Industrial peers Honeywell and 3M Co were down about 6%, as Wall Street’s main indexes hit their lowest in nearly seven weeks over concerns about fresh coronavirus-driven lockdowns.

(Reporting by Ankit Ajmera and Rachit Vats in Bengaluru; Editing by Vinay Dwivedi)