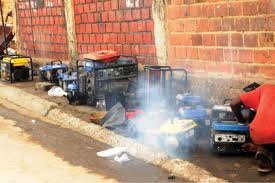 05 May 2014, Lagos – Bagido area of Ijede Lagos, was weekend thrown into mourning following the discovery of the decomposing bodies of a man, his wife and five children in their building.

The man identified as Etim Edet was reportedly a staff of Nigeria Brewery Plc.

The family of seven was suspected to have been killed by fume from a power generator mounted in the house.

The late Etim, was reported to have been last seen at his place of work on April 25, 2014.

Apprehension reportedly set in following his absence on April 28, without prior notice, an action his colleagues described as unusual.

Tension heightened over his continued absence till Friday, with calls on his mobile telephone unanswered.

Some of his colleagues said to have gone to check on him at home became curious following the stench that was emanating from the building.

Consequently, policemen from Ijede division were alerted and when the door was forced open, the decomposing bodies were discovered.

The bodies included that of Edet, his second wife, his 17-year-old eldest son from his first wife, a female relation, whose age was put between 14 and 15 years and three other children born by the second wife, aged seven, five and three years respectively.

A resident, who identified himself as Mr Ayodele Disu told Vanguard that the Edets could have been rescued had there been houses around theirs.

Describing the incident as sudden and unnatural death, the Lagos State Police Public Relations Officer, Ngozi Braide said: “At about 4.00pm, one Etim Edet , a staff of Nigeria Brewery Plc Lagos was allegedly found dead with his wife and five children on their beds at his residence at Bagido area of Ijede.

“No sign of violence was seen on their bodies. The deceased’s were suspected to have died from generator fumes.