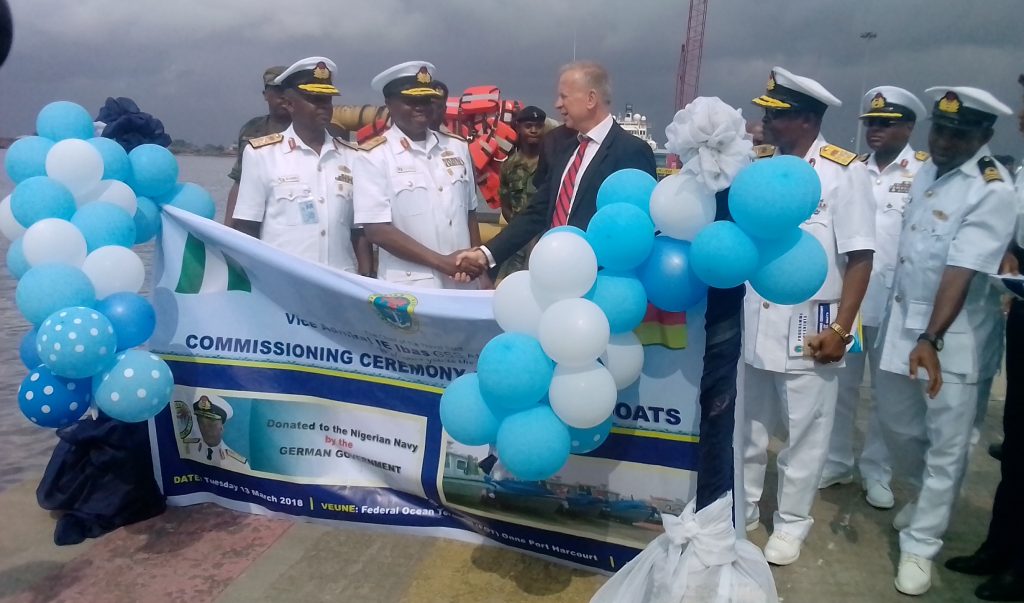 13 March 2018, Sweetcrude, Port Harcourt — The Federal Republic of Germany on Tuesday affirmed the commitment of German companies and businesses operating in the country, to the local content policy of Nigeria.

The Consul-General of the German Consulate, Lagos, Ingo Herbert, disclosed this in Onne, Rivers State, at the handing over of five Epenal gunboats to the Nigerian Navy, as part of the German government’s ‘Enable and Enhance Initiative for its partner countries.

The German Consul General explained that more German companies were coming to Nigeria and they were eager to invest in Nigeria’s local content for the benefit of the nation’s economy.

Herbert, who apologised for the inability of the German’s Ambassador to Nigeria, Dr. Bernhard Schlagheck to be at the event‎, expressed optimism that the boats would help in the fight against illegal and unregulated fishing, oil theft, terrorism and other crimes, especially in the Lake Chad Basin.

According to him, “Especially when you consider how important the maritime traffic is, with more than 90percent of all growth worldwide really using maritime to reach their goals, it is very important to keep the maritime environment free of criminal elements.

“Another interesting aspect of the donation by the German Government is that the finance of the boats was donated to the Nigerian Navy and the boats were built here in Nigeria.

“What this means is that it was not just an import from a foreign nation but a co-operation with a strong local content.

“Last time in Port Harcourt, I inaugurated a vocational training center according to the German module and standard, to bring more German technologies, machines, and investments to Nigeria.

“More German company are coming to Nigeria and they are eager to invest in local content and which is for the benefit of your economy, Mr. Ingo Herbert said.

Ibas who was represented at the event by the Chief of Logistics, Naval Headquarters, Rear Admiral James Oluwole, said the security challenge facing the country at the moment required enormous material resources to surmount.

He explained that Epenal Group, an indigenous company, was contracted by the Nigerian Navy and funded by the German Government to construct five 8.2m boats for the Navy in 2017, adding that each of the boats are fitted with two 250HP Yamaha Outboard engines, mounting for 12.7mm and AGL guns.

The highpoint of the event was a long boat cruise in the newly commissioned boats by the German delegate together with the representative of the Chief of Naval Staff, other Naval personnel and other dignitaries at the event.