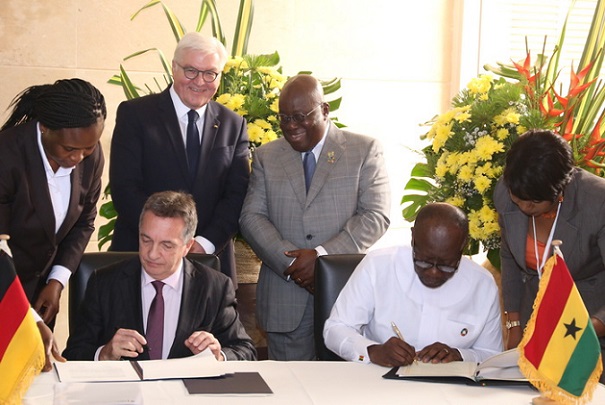 *Mr Friedrich Kitschelt, the German Deputy Minister for Economic Cooperation, and Mr Ken Ofori-Atta signing the deal between the two countries. With them are President Akufo-Addo and Mr Frank-Walter Steinmeier, the President of the Federal Republic of Germany.

The agreement was signed as part of activities marking the three-day official visit of the German President, Frank-Walter Steinmeier to Ghana.

Ghana’s Finance Minister, Ken Ofori-Atta, and Germany’s Deputy Minister for Economic Co-operation and Development, Friedrich Kitschelt, signed the agreement for both countries in the presence of President Akufo-Addo and the visiting German President.

The agreement is part of Germany’s G-20 Compact with Africa for sustainable economic development.

The Partnership with Ghana is aimed towards improving conditions for sustainable private sector investment ― investment in infrastructure, economic participation, and employment in the country.

Following the signing of the agreement, the two Presidents addressed a joint press conference where President Akufo-Addo described relations between the two countries as excellent, adding that “Ghana is the third biggest trading partner of Germany in sub-Saharan Africa.”

President Akufo-Addo said Germany had always been distinguished by some key elements that were worthy of emulation by Ghana, citing the Small and Medium Scale Enterprises (SMEs) sector.

He said SMEs were the overwhelming numbers of enterprises in Ghana’s economy and how to scale them up and strengthen them was the major challenge of policy, adding that it was an area where Ghana could profit very strongly from the German experience and the German model.

Additionally, President Akufo-Addo said, another area where Germany had taken the lead in the world was the training of its workforce, alluding to the so-called dual system that allowed people to work and study.

This, he said, had shown in the continuous performance and resilience of the German economy and made the German workforce one of the most efficient not just in Europe but also in the world at large.

President Akufo-Addo said education was the main priority of his government and that a considerable part of state funds had been invested in education with the vision of scaling up the capacity and competence of the nation’s workforce.

“We have significant hydro resources as we all know and we believe that going down the road, a mixture of hydro and renewable energies represents the best mix for the energy generation of the future and we are hoping again that this is an area where we can have a meaningful intercourse with Germany,” he said.

He noted that the German President had come to Ghana with a very impressive business delegation and that he was hopeful that the delegation would have a very serious and meaningful intercourse with the Ghanaian business community so that the very strong relations that existed between the two countries would continue to deepen.

“Ghana beyond aid is one of the finest and greatest resonances of the leadership of Germany and it provides another important basis for this continuing and fruitful dialogue between our two countries,” President Akufo-Addo stressed.

On his part, President Steinmeier noted that relations between Germany and Ghana had a long-standing tradition which, in the last years, had been given additional impetus and had grown immensely.

That, he said, as evidenced by the visible proof he and his delegation had when they interacted with the business representatives from Ghana saying the interest in each other was incredibly great and a matter of curiosity for various reasons.

He said Ghana had shown the world in the last twelve months that it was possible to move away from divisive tendencies through determined actions and that the data available to Germany on Ghana had improved, stressing that “we are more optimistic more than we were a year or two ago.”

President Steinmeier said interest on the part of Ghana in Germany’s investment was just as great because it was not only about investing in companies and plants but also about German companies bringing Germany’s educational model and technical experience to Ghana.

The German President was full of praise for the government’s focus on education in spearheading efforts to build a Ghana beyond aid and pledged the commitment of Germany to supporting and co-operating with Ghana to make that vision possible and attainable.

“This is very important and as important as it is, we are more than happy to be of assistance and we will support you in that endeavor and co-operate with you in that regard and the joint declaration of intent on the design of a partnership to promote private investment and sustainable economic development is a sign of us respecting fully, what Ghana has been doing in the recent past,” he added.

Earlier, at the Flagstaff House in Accra, the German president inspected a guard of honour mounted by the Ghana Armed Forces and took the national salutes of both countries including a 21-gun salute fired in his honour.