on: January 22, 2020In: Community Development, featured 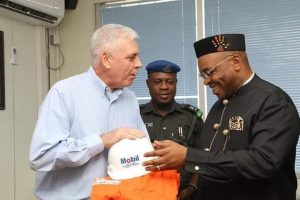 The Governor during a meeting among the state government, management of Mobil Producing Nigeria and leaders of Mobil’s host communities in the state, stressed the need for the company to strengthen its relationship with her publics.

Speaking, Governor Udom said his visit to the company was aimed to strengthen a corporate relationship and chart a course for more involvement of stakeholders in community projects initiated by the oil firm.

“We have decided that we will see a way to have that cordial working relationship between not just government and ExxonMobil, but including the host communities as well and even the staff, so we look at the welfare of everybody.”

Governor Emmanuel commended the management of ExxonMobil and the host communities for their peaceful co-existence and called for sustained peace in the area.

Earlier, the Chairman and Managing Director of ExxonMobil Nigeria Unlimited, Mr. Paul McGrath, thanked the governor for the visit and for initiating the interaction between the management of the company, the state government and the host communities.

McGrath said the meeting has been long wished as a good start-off for the company and its host communities for the year 2020.

Owodiong-Idemeko added that the peace and security maintained has been a great boost to the company’s success and advocated for dialogue in settlement of dispute that may arise between the company and the host communities.