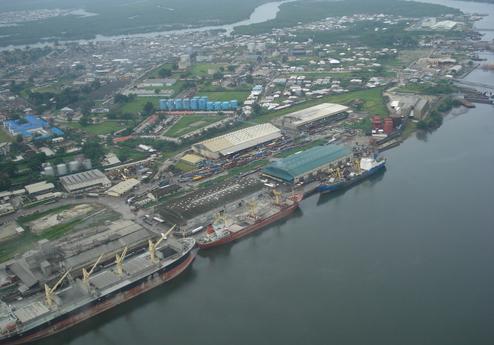 *Vessels anchored at the Port-Harcourt harbour

Port Harcourt — Rivers State Governor, Nyesom Ezenwo Wike, has berated the Federal Government and the Nigerian Ports Authority, NPA, for neglecting the revamping of the two seaports in the state, for optimal operation.
Speaking at the maiden delivery of Domestic Liquefied Petroleum Gas to downstream investor, Stockgap Terminal by the Nigeria Liquefied Natural Gas Limited, NLNG, recently, Governor Wike berated NPA for refusing to invest in Rivers State.
The Governor accused NPA of reneging on its promise to dredge the Bonny channels to allow big vessels access the two seaports in the state.
According to him, “NPA is willing to collect levies and charges in Rivers State, but they refuse to dredge Bonny channels and make the right investments.
“What is the Nigerian Ports Authority doing? Rivers State government should not be the one to dredge the water channels and NPA is busy collecting levies and revenues from operators.
“Why should that be? You don’t expect me to dredge waterways for NPA to be collecting the revenue.”
Governor Wike also regretted that the Federal Government was gearing up plan towards building a new seaport in Lagos, while rendering the ports in Rivers State idle and grounded with no development and attention.
He appealed to the Federal Government to forgive Rivers state people for any wrong they may have done to warrant perceived federal neglect currently being suffered by the state.

“We have two seaports in Rivers State, the Port Harcourt port and Onne port. They (Federal Government) killed them, yet they are building a new port in Lagos, but those in Rivers State you rendered idle, grounded with no development attention. Yet I will dredge the water channel then federal government will collect revenue.
“Even if Rivers State has done anything wrong, please we are begging, forgive us. I don’t even think we have done anything wrong as Rivers people.”
The governor assured that the state government would continue to support and protect every investment in the state by providing enabling environment to make it thrive.