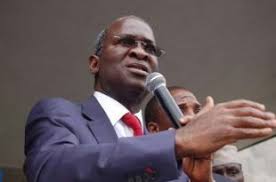 Oscarline Onwuemenyi
17 November 2017, Sweetcrude, Abuja – The Minister of Power, Works and Housing, Mr. Babatunde Fashola, has disclosed that the federal government has paid over N60 billion out of the N70 million verified electricity debts owed by ministries, departments and agencies (MDAs).

Fashola made the disclosure at a workshop put together by his ministry to enlighten journalists who report the sector.

“You can see that debt is almost paid. That and all the regulations being put in place as highlighted by the Vice Chairman of the Nigeria Electricity Regulation Commission (NERC) are part of government’s commitment to its Power Sector Recovery Programme,” he noted.

Recently, the 11 electricity distribution companies (Discos) stated that the financial shortfall in the power market had reached N809 billion, but figures on their real debts to the market have remained quite debatable.

Similarly, in an August 2017 report on the summary of Discos’ invoices and remittances from the Market Operations Department of the Transmission Company of Nigeria (TCN), the Discos’ debt to the market was N120.7 billion.

Fashola however, said at the October edition of the monthly power sector operators meeting yesterday in Owerri that the government has approved the debt be set off against the Discos, and that it would soon communicate that decision to them.

“In the last month, specifically on Wednesday, October 4, 2017, the Federal Executive Council approved the verified sum of federal government MDA debts of N25.9 billion, and its payment by setting it off against the debts owed by the Discos to NBET.

“You will be receiving official communication of how these have been applied to reduce debts owed by Discos to NBET,” said Fashola,

The Minister signed the N2 trillion contract for the project last Friday with the three Chinese contractors who said the project would take six years to complete. Chinese EXIM will bring 85 per cent of the funding while Nigeria is expected to raise 15 per cent, government said.

He said negotiations for the loan will now start through the Minister of Finance with the Chinese EXIM. He also explained that once the negotiations are completed, he will be consulted and then government can work to flag it off.