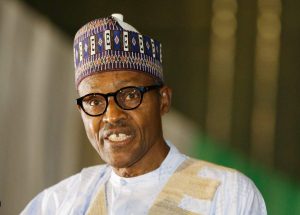 29 August 2018, Sweetcrude, Lagos — President Muhammadu Buhari says the Nigerian maritime sector is being repositioned by the Federal Government to take a leading position as one of the viable alternate sources of revenue in growing the economy as part of its resolve to continuously diversify the Nigerian economy.
The President, who was special guest of at a public book presentation titled: ‘Harnessing Nigeria’s Maritime Assets – Past, Present and Future’, authored by the Executive Director, Finance and Administration of the Nigerian Maritime Administration and Safety Agency (NIMASA), Mr. Bashir Jamoh, said there was no change without pain, hence the need for Nigerians to keep faith with the Federal Government’s determination of rejuvenating the Nigerian economy.
President Buhari, who was represented by the Minister of Transportation, Mr. Rotimi Amaechi, noted that Nigeria has relied so much on crude oil.
“It is time to focus on other sources particularly the Blue Economy, which covers both aquatic and marine spaces, including oceans, seas, coasts, lakes, rivers and underground waters. Which also encompasses a range of productive sectors; fisheries, aquaculture, tourism, transport, ship building, energy, bio-prospecting, under-water mining and related activities, all pointing towards economic prosperity, when adequately harnessed,” he said.
“We know that the maritime sector has so much to offer the economy in terms of jobs and wealth creation and also contribution to the nation’s Gross Domestic Product (GDP). On our part as a government, we are determined to walk the talk so that our economic diversification initiative will be fully achieved for the benefit of all Nigerians”, the President added.
He commended the Dr. Dakuku Peterside-led management of NIMASA for its efforts in repositioning the maritime sector and for its huge contributions to the Consolidated Revenue Fund (CRF) of the Federal Government.
He described the book being launched as a document that should be given adequate consideration as it speaks to the authority and other stakeholders in the maritime sector.
He said his ministry understood stakeholders’ yearnings for the urgent review on the guidelines of the disbursement of the Cabotage Vessel Financing Fund (CVFF), and called for an immediate meeting in his office to discuss commencement of the disbursement of the fund.
The event also had in attendance the Minister of Information and Culture, Alhaji Lai Mohammed, the Chief of Army Staff, Lt. General Tukur Buratai, among others.