26 May 2015, Lagos – In this interview with ENIOLA AKINKUOTU, a former General Secretary of the National Union of Petroleum and Natural Gas Workers, Chief Frank Kokori, speaks about the fuel crisis and the just concluded elections 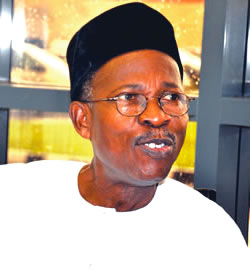 As a major figure in the June 12, 1993 election, how do see the conduct and outcome of the just concluded elections?

I am very happy with the elections, especially the outcome because this was my dream. I wanted a good nation, a free nation where there is justice and equity and I think with this election, things are getting better. The elections have come and gone and they were hotly contested but we were flabbergasted about some things we saw because we never thought Nigerians could stoop to this level of pettiness and meanness. The bad blood and hate campaigns were at the highest level ever and I was not happy about it but I thank God that the elections have ended and the rightful person has won. I am happy that the Armageddon that was predicted never happened and we thank President Goodluck Jonathan, who even though encouraged most of his campaigners to stoop to that level, at the end of the day, was man enough to behave like a statesman and I think that is what has made Nigerians to appreciate him. Besides that, he has run this country aground in the last six years. He ran this country without any discipline, without caution, with impunity.

The immediate past Chairman of the Peoples Democratic Party, Alhaji Adamu Mu’azu, said the hate campaigns of some people in the party also contributed to Jonathan’s defeat. Do you share this view?

It was Jonathan’s incompetence and poor performance that led to his defeat. If he had performed well, people would have voted for him. As the President, the buck stops at his table. As the Chief Executive Officer of a company, you should take responsibility for whatever happens in your company. Whether you are a governor or a local government chairman, as long as you are in the position of leadership, you are responsible for what happens. So, we cannot blame anybody for his loss, Jonathan has himself to blame. As a President, if I want to fight corruption, I will fight it. I will give judges the free hand and if a judge misbehaves, he will be dealt with. If a police boss misbehaves, I will arrest and prosecute him. I will give the Economic and Financial Crimes Commission the freedom to operate as long as they are following the law. Jonathan did not do all these things and that is why people say he was incompetent and he actually was incompetent. So, his government lacked focus and that was why he failed. Jonathan was extremely incompetent. In other words, Jonathan could not handle a big country like Nigeria. If you remember, Jonathan got to the presidency by accident. Everything about his life has been through God’s favour. He was deputy governor, governor, vice president and President. God favoured him like former President Olusegun Obasanjo. When he (Jonathan) acted for the late President Umaru Yar’adua, there was so much sympathy for him because of what the cabal headed by Yar’adua’s people did to him so people from all over the nation voted for him in 2011. As a son of the Niger-Delta we decided to give him a chance and he won that election fair and square.

But Jonathan won the election in the Niger Delta?

The elections were shamefully rigged in the South-South and the South-East. The figures declared for Jonathan were bogus. At most, Jonathan won a third of the votes there. In these regions, the All Progressives Congress supporters were seriously intimidated and votes cast for the party were given to the PDP. In some areas, the election results were allocated to parties. They would say, for instance, give the APC 30,000 votes and give the PDP 500,000. The security agents in the South-South and the South-East and officials of the Independent National Electoral Commission were totally compromised. I am a leader in the Niger Delta and I am not just making spurious claims. I have said it times without number that while other areas in Nigeria are being liberated, there are no proper democratic elections in the South-East and South-South. I have been monitoring elections here since 2003. Don’t assume that elections are free and fair based on the conduct in Lagos and Abuja.

I think INEC needs to look into that for future elections but I am telling you that anything that could have happened in the North was a child’s play compared to what happened in the South-South and the South-East. At least children voted in the North. Over here, they just announced figures. The PDP, security agents and INEC would just drive people away. They would give the APC 30,000 votes, PDP 500,000 and Labour Party 20,000. When I was growing up in the days of the Action Group and the National Council of Nigeria Citizens, our definition of electoral malpractice was when a person voted two or three times. But today, they just write results and announce.

As one who has been in the oil sector for decades, how can this incoming government address the fuel scarcity ravaging the country?

People have high hopes because the APC has been in the opposition for many years and have made so many promises to Nigerians. I am sure that the President-elect, Muhammadu Buhari, will tackle it. It was corruption in the payment of subsidies that led to this mess. If that area is properly handled and you make transparency the watchword and enforce discipline, things will work. Why should we be importing such a big quantity of fuel in the first place if not for corruption? So, these are the terrible things the PDP government overlooked over the years because of their greed and quest for obscene wealth. They have ruined the lives of many Nigerians. People cannot get good education, quality healthcare and the youths cannot get jobs. I am a labour man and I believe in egalitarianism. People have watched Buhari and have seen the kind of life he is living and that is why some of us have faith in him. His track record speaks for him. Even though I am from the Niger Delta, I believe in him.

Nigerians are now buying fuel for as high as N400 per litre. Do you think subsidy removal can put a complete end to this fuel crisis?

People misunderstand this issue of subsidy. Subsidy is alright for Nigerians. The problem was that the money for subsidy was grossly mismanaged. I say subsidy is alright because the oil market fluctuates rampantly such that you cannot predict it. For instance, crude could be sold at $120 per barrel today and two weeks later, it falls to $50 per barrel. As long as we continue to refine our crude oil abroad, we will continue to incur landing cost. That means if the competitive landing cost of petrol per litre is N99 and Nigerians are buying fuel at N75, that means the government is only adding N25. In other words, if the government is doing that, it is ok but that money should be properly monitored and scrutinised and it must be transparent so that you don’t see someone smiling to the bank to withdraw between N2bn and N3bn which is unearned. If the landing cost of a litre of refined oil is about N40 and when you know that a period of three years it will remain at between N40 and N45, you don’t need subsidy. But Nigerians cannot be comfortable paying N110 if that is not the landing cost. I am not talking of a time when people were forced to buy fuel at any rate. In a normal situation, you drive into a filling station as it is done in civilised countries but we do that at the expense of the economy because many rogues just go unpunished. They steal the subsidy money and the people who are importing, collecting the subsidy, all of them are cabals. And these are the people that are swindling this country. So, when you talk of subsidy, a man like me who understands all the intricacies and the arithmetic will tell you to retain subsidy. But I am happy a new government is coming in. The PDP government is a complete write off. They have been bad since the days of Obasanjo. They are a bundle of greedy people who want to steal all the nation’s resources. This is not capitalism; this is not even conservatism as they claim. Conservative governments are disciplined. Go to Europe and see how conservative government is practised. So, I am happy that Nigerians have driven them away. The APC should not take things for granted and make the same foolish mistake that the PDP made. We will monitor the APC government because we want an improved standard of living for our people because we are living hopelessly now and that is why our youths are now taking to crime.

There is a belief that refineries in Nigeria are not working because prominent politicians have refineries in neighbouring countries.

It is a lie. Most of the oil we import come from outside the West African region. We only have a few refineries in Ghana and Cote D’Ivoire. The refineries will work if there is transparency. There is something called turnaround maintenance which is a fraud ridden process. We spend hundreds of millions of dollars on this but in a good government, there will be transparency and Nigeria has experts that can repair these refineries.

Can these refineries be repaired in four years?

You cannot change everything in four years but when Nigerians start seeing little changes in three to six months and then in one year and you see people being prosecuted and jailed for stealing public funds, and the government ensures that all the funds that were taken overseas are recovered, there is no way the needed change will not come. Why should Nigeria have up to $250bn in stolen funds abroad and only $35bn in our foreign reserves? The international community is aware of this and the incoming government is not foolish. Anybody that thinks he has stolen and will go scot free must be deceiving himself because if any thief goes scot free, then the APC-led government is not serious. So, the APC government must make sure that Nigerians that stole money are prosecuted and jailed while the money should be retrieved. Nobody should run a government by saying you will forget the past, no. The way Nigeria is today, people must be punished for the pains they have subjected Nigerians to.