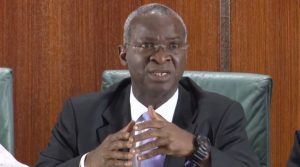 17 January 2017, Sweetcrude, Abuja – The Federal Government has terminated the concession contracts for the management of Fiber Optic Network of the Transmission Company of Nigeria (TCN) with Alheri Engineering Company Limited and Phase3 Telecom Limited.

In a letter to President Muhammadu Buhari by the Minister of Power, Works and Housing, Mr. Babatunde Fashola, dated October 31, 2017, with reference number FMP/OPS/05/1, obtained by reporters in Abuja, the minister faulted the process of the concession, pointing out the breach of agreement, as well as conflict of interest in the entire transactions.

Fashola informed the president that going ahead with the concession would affect the stability, optimization and continued expansion of the national grid, which, in turn, will affect communication in the country generally.

“The Concessionaires were to pay a concession fee of $40 million each for the use of TCN’s asset to service their customers. The concession fee was not just for the right of way upon which the transmission lines are constructed, but also for the use of the fiber optic network which was built by TCN along with the transmission lines. The agreement also provided for shelter fees of 2.5 per cent on gross revenue.

“Since 2006, Phase3 and Alheri have paid only $2 million and $3.5 million concession fees respectively. The concessionaires have also failed to build most of the enhancements their concession agreements required them to build, operate and transfer. All efforts by TCN management to ensure the concessionaires paid their outstanding debts failed,” the letter stated.

Fashola further noted that, “Due to the manifest breach of the Fiber Network Concession agreements by the Concessionaires, and the existence of conflicts of interest as shown by the foregoing paragraphs, I concur with the management of the TCN and that the agreements were voidable and that they stand terminated.”

The minister traced the history of the concession and concluded that the concessionaires had done well in areas of breaching clauses of the agreements like misrepresentation to the Nigerian Communications Commission (NCC), non-payment of electricity bills for eleven years, non-adherence to the use of 50per cent of the network among others.

Apart from the breach, the President was told that the concession agreements were entered into under circumstances of conflict of interest which made it impossible for the then TCN management to protect the interest of the nation.