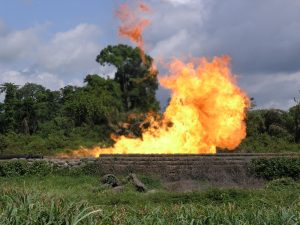 05 August 2018, Sweetcrude, Lagos — The Federal Government will issues gas flare commercialisation licenses to potential investors in the first quarter of next year as it pushes to end routine gas flaring in the country by 2020.

This follows the recent signing of the Nigerian Gas Flare Commercialisation, NGFC, Bill into law by the government.

This was revealed to SweetcrudeReports by a top official of the Department of Petroleum Resources, DPR, in Lagos. The Bill was singed into law in July.

The source revealed that with the coming of the law, the government will embark on aggressive advertisement for prospective investors in August.

The NGFC initiative is a government plan to allocate gas flare sites to companies with both technology and financial capacities to harness the flared gas for commercialisation.

It was learnt that after the advertisement in August and an aggressive campaign for prospective investors, a proper bid round would be held in November, with licenses being issued to successful companies in the first quarter of 2019 to begin commercialisation of the gas.