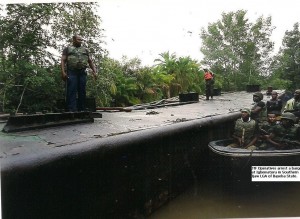 15 August 2013, Yenagoa — Officers and ratings of Central Command of the Nigerian Navy have arrested the grounded crude oil laden barge in the St. Nicholas River on the Brass Island and the crew of a tug boat accused of trying to pull the barge and its alleged stolen content in Bayelsa State.

The Brass-Akassa corridor on the Atlantic fringe has been identified as a notorious spot for crude oil theft by the country’s security operatives.

According to him: “On August 10, 2013 at 18:25, a Naval team on routine patrol was attracted to a suspected barge movement from Odioma to St.Nicholas River.

“On approaching the self propelled barge, it was discovered to have gone aground. The Barge was later identified as MV LiLA.”

The Navy authorities explained that based on the conviction that the escaped crew and the unidentified owner of the suspicious barge may attempt to rescue same and its alleged stolen crude oil, laid ambush and were rewarded with the seizure of a tug boat identified as MV St. Victoria and arrest of its six Nigerian crew.

According to a statement by the Navy Command Operation Officer, Commodore E.O Enemor, “the tug was arrested at two nautical miles off the St.Nicholas River.

“The arrest was effected by NNS Bomadi, a Naval gunboat, due to her suspicious presence within the vicinity of the grounded barge.  At the time of arrest, the tug had a six-man crew, all Nigerians.

“Meanwhile, relentless efforts are being made to ensure that the barge is salvaged from its present position.”