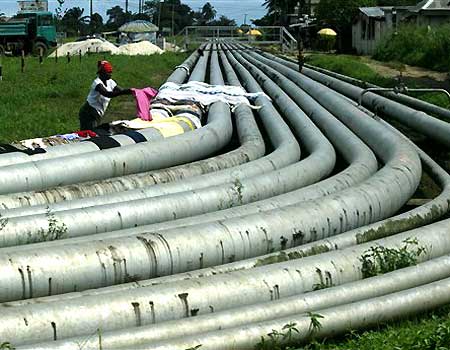 25 February 2018, Sweetcrude, Port Harcourt — The Ken Saro Wiwa Associates, KSWA, have accused the Shell Petroleum Development Company, SPDC, of renewing efforts to lay pipelines in Ogoniland with attempts to return to the area through the back door.

KSWA also accused the current leadership of the Movement for the Survival of Ogoni People, MOSOP, led by Mr. Legborsi Pyagbara, of falling the people of Ogoni by not protecting the legacies of late environmentalist, Ken Saro Wiwa.

National Coordinator of KSWA, Chief Gani Topba, speaking to newsmen in Ogoni at the weekend, said the position of Ogoni is that the Royal Dutch Shell and its Nigerian subsidiary SPDC, remains a persona non grata in Ogoniland, as prescribed by late Ken Saro Wiwa in 1993.

Topba stated that the 12 points communique issued by the Ogoni General Assembly in January, which states that Ogoni must have 25 percent stake in OML11 and the Federal Government must revoke SPDC’s subsisting lease over Ogoni Fields, to pave the way for discussions with elders before the resumption of oil production.

According to him, “Are you not aware that Shell has started laying pipes in Ogoni? MOSOP was supposed to mobilise Ogoni people and truncate that process.

“Look at HYPREP; MOSOP President sits in the cleanup Governing Council and approved N3 billion to be paid upfront to a contractor in an area where people don’t have potable water.

The Ken Saro Wiwa Associates further disclosed that the resolutions reached during the Ogoni General Assembly in January, have been adopted by the people of Ogoni, and the group will ensure that every position in the communique is implemented.

Topba further announced that the group would do those things which Ken Saro-Wiwa wanted to do before he died.

“We are going to ensure that we circulate this position around the world, we will communicate it to the United Nations, the President of the Federal Republic of Nigeria and the National Assembly will have a copy. We are doing this so that the government can know what to work with. It is a working document, not only for Ken Saro-Wiwa Associates but the Ogoni people.

“Ogoni must develop. Ogoni people have just come together to make their position known. The international community is aware and I can tell you that friends of Ken Saro-Wiwa all over the world are supporting us to work with this document.

“On Ogoni peace summit coming up in March, Chief Gani Topba said, “when the Service Chiefs come here, Ogoni people would demand their quota. If there are recruitment in the Police, military, or the DSS, we should be able to get our quota. That will also create wealth for our people.

“We assure people that they can come here to invest; it is not about oil, there are things to do in this land to create jobs for our people,” he said.