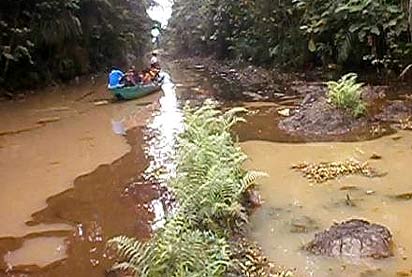 Port Harcourt — A group known as Oil and Gas Producing Areas Enlightenment and Empowerment Initiative, OGPAEEI, has commended the National Oil Spill Detection and Response Agency, NOSDRA, for prompt intervention in the oil spill which had impacted communities in Bayelsa State since 2016.

Igbabiri disclosed that the group had written a petition to NOSDRA over an abandoned oil spill site within Shell’s oilfields in Ogbia Local Government Area of Bayelsa State.

While describing OGPAEEI as an NGO focused on peacebuilding in oil producing communities, he explained that the positive response of NOSDRA was swift and heartwarming.

The group stated that the intervention was a lifeline to the environment as it prevented further degradation of the areas polluted by the oil spill and abandoned by the oil firm.

According to him, “The appreciation and commendation are prompted by NOSDRA’s action on the October 2016 Spill incident that discharged crude into Ekole Creeks and Nun River and adversely affected Bayelsa Communities along the waterways.

“The prompt action of the Federal Government compelled SPDC which had left the site without remediation and clean up to resume post-spill impact assessment, mapping of impacted areas.

“We, therefore, appreciated the untiring efforts of NOSDRA led by its Director-General Dr. Idris Musa, and his team of dedicated staff who have insisted that the spill response must meet laid down procedure and international best practices.

“We give kudos to all the parties that worked very hard to ensure post-spill impact assessment is carried out in 18 impacted coastal communities in Bayelsa.

“The impacted Anyama communities in Ogbia Local Government Area of Bayelsa would receive a new lease of life when clean up and remediation is concluded.”

Igbabiri also disclosed that NOSDRA’s template for the post-impact study to include, soil, social, health and health impact assessment is in line with the aspirations of the people.

He expressed delight that the show of sensitivity to the plight of the residents in the affected areas has rekindled the hope of the people in government and would lead to harmony and peace in the communities.