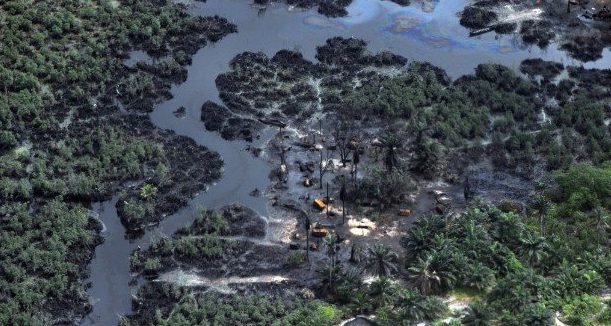 *Aerial view of oil impacted community in the Niger Delta

Port Harcourt — Oil bearing communities in Rivers State have called for partnership between the government and oil companies to provide infrastructural and human capital development for oil producing areas.

The Association of Oil and Gas Host Communities of Rivers State, who made the call, expressed regrets that after many years of hosting oil production, host communities are still riddled with the challenges of basic amenities.

Chairman of the Association, Herbert Awotu, appealed to oil multinationals operating in the Niger Delta region to provide for their host communities, the same social amenities obtainable inside their operational bases.

Awortu regretted that members of oil and gas host communities are living a life of misery in spite of their huge economic contributions to the nation’s oil wealth.

He also disclosed that host communities in Rivers State have taken steps to reduce cases of pipeline vandalization and youth restiveness in the communities, in order for peace and development to thrive.

“Taking into cognisance that Rivers State is the petroleum hub of Nigeria, oil pipeline vandalism has been reduced and brought to its barest minimum, thereby curbing youth restiveness in oil producing communities.

“Only an atmosphere of peace would provide a platform through which people from oil and gas host communities may interact and play a positive role in all matters affecting their social and economic well-being.”