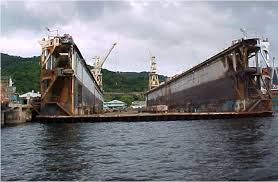 Port Harcourt — The Save Niger Delta Group has threatened to lead a massive protest that would shutdown the head office of the Nigerian Maritime Administration and Safety Agency in Lagos, over her refusal to relocate the modular floating dockyard to Niger Delta.

The group said the floating dockyard acquired at a cost of N50billion, was proposed for Okerenkoko in Delta State, owing to the Nigerian Maritime University, regretting that the dockyard has remained idle since it arrived the country in 2018.

Spokesman of the group, James Ebimene, in a statement titled, Mother of all protests to rock NIMASA head office over FG’s refusal to relocate Floating Dockyard to Delta, noted that the dockyard proposed location has been Okerenkoko in Delta State.

Ebimene regretted that the multi-million dollar floating dock, bought with taxpayers money, was currently lying idle in Lagos, with the cost of maintenance estimated at about $30,000 daily.

He called on the Federal Government to urgently relocate the floating dockyard from Lagos, where it had been lying unused, to the Niger Delta, without further delays

“The intention of NIMASA, as at the time the floating dock was acquired, was to deploy it to Okerenkoko in Delta State but they changed the plan and put it on security challenges in the region, the agency decided to situate it in Lagos.

“The dock, was planned in the Niger Delta, to open up the region and make it more viable, including the employment that it will generate and training on shipbuilding processes and the benefits of the dock to the region would be immeasurable considering the Nigerian Maritime University in Delta.

“Without further delay, Federal Government should relocate the mega dock specifically designed for the region from Lagos waters, where it had been lying unused, to the Niger Delta.

“We have mobilized all our members across the Niger Delta states to storm NIMASA headquarters in Lagos for a peaceful protest by the end of this month. Enough is enough.

“The location of the dry dock in Lagos waters is contrary to the initial approval by the Federal Government for its location in Delta.

“So therefore, we have mobilized youths and women to relocate to Lagos by the end of this month (September 30) to demand that the dry dock should be moved permanently, installed and commissioned in Delta, considering the contributions of the region to the nation’s economy,” the statement reads.”