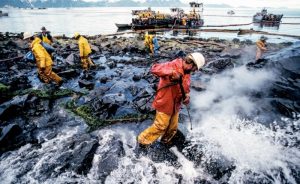 GreenFaith an American based multifaith, grassroot, climate justice and environmental organization whose mission is to inspire, train, and organize people of diverse religious and spiritual backgrounds around the world for climate and environmental action.

Global Director of GreenFaith, Ms. Meryne Warah, spoke during the National Consultative Dialogue on Faith and Climate Change in Port Harcourt, with the theme, ‘Grassroot multifaith voices on oil drilling and gas flaring.’

Warah who explained that climate change was npt a respecter of religious beliefs, called on Faith leaders to come together and speak for communities affected by oil and gas pollution, by holding the government accountable.

“We have realized that the dipropionate impacts of climate change does not respect faith/religion, it hits everyone the same. And that is why is it vital that faith communities should work together towards the protection of the communities where the corporations have left desolate and hopeless, especially where oil drilling has taken place.

“Nigeria is the largest agricultural producing region in Africa, and yet they have allowed companies like Shell to pollute the same land that gives them food. What is the need for development, when the same ‘development’ infringes on the right of farmers and fishermen, while lining the pockets of the rich, corrupt and countries that does not respect the culture, human life and their way of life.

“All faith communities, Christian, Hindu, Islam and traditional teachings, all call on us to speak for the poor and protect the environment because this is what they have been called to do. No religion is greater than the other when it comes to protecting our community, and climate.”

Similarly, the Executive Director of Lift Humanity Foundation, Mr Pius Oko, said God entrusted the earth to mankind, however, man-made degradation and the effect of climate change were already felt in many vulnerable communities such as the Ogoniland, devastated by oil spills pollutions.

Oko regretted that 11years after UNEP Report was submitted to Nigeria’s government, HYPREP has been unable to provide potable water to Ogoni people, despite water being an emergency measures recommended by UNEP.

“The imperative to care for creation is strong across all faiths, communities and worldviews. Earth is God’s creation, oil spills and gas flaring exacerbates poverty, inequality and undermines the ability of communities, thereby a threat to livelihoods, agriculture, health and infrastructure.

“Restoration of the already degraded ecosystems in Nigeria due to illegal oil refining and gas flaring is a very crucial challenge in achieving the Paris Agreement and UN Sustainable.

“As faith community, civil society and movements; we must stand & speak up to the misdeeds of the agency & institutions concerning Ogoni cleanup and remediation of the polluted and devastated Niger Delta region.”

A participant at the event, Rev Sister Lilian Chibiko, of Daughters of Mary, Mother of Mercy, called on the government to prevail on oil companies to be environmentally responsible.