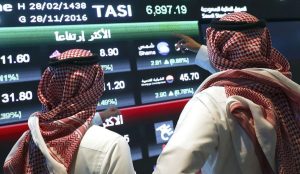 News wire — Markets in the Middle East dived on Thursday, with oil prices rising above $105, after Russia’s attack on Ukraine spooked investors across the globe about disruptions to energy supply.

Russia launched an all-out invasion of Ukraine by land, air and sea in the biggest attack by one state against another in Europe since World War Two. Ukraine reported columns of troops pouring across its borders from Russia and Belarus, and landing on the coast from the Black and Azov seas.

Oil prices broke above $100 a barrel for the first time since 2014, stock markets slumped and the rouble hit a record low after the invasion.

Saudi Arabia’s benchmark index dropped 1.8%, after shedding as much as 2.5% earlier in the session.

Only eight stocks of 211 listed in the index ended in the green.

Outside the Gulf, Egypt’s blue-chip index led the losses, as it plunged 3.6% in its steepest fall since March 2020.

Financial and IT stocks fell the most.

Dubai’s main index closed 1.8% lower to post its biggest daily fall in a month. The index slid as much as 3.7% earlier in the session.

Emirates Refreshments was the top percentage loser, down nearly 10%.