Port-au-Prince — Haitian protesters blocked roads in the downtown area of the capital of Port-au-Prince on Wednesday, where shots were heard as anger mounted over fuel shortages that have intensified as a result of gang violence.

Gas stations across the country are mostly closed, with a major fuel terminal having been forced to halt operations due to a turf war between rival gangs in a town outside the capital that has killed at least 50 people. 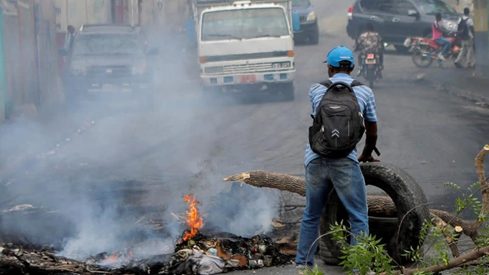 Groups of motorcycle drivers on Wednesday morning blocked intersections in Port-au-Prince and some of them set tires on fire, witnesses told Reuters.

A brief volley of gunfire rang out, though it was not immediately evident who was firing or why.

“The security situation is an important problem in Haiti. (Prime Minister) Ariel Henry is working for a quick solution,” a spokesman for the prime minister’s office said in response to a request for comment.

Gun battles between the G9 and GPEP gangs for control of the town of Cite Soleil outside the capital since Friday have left thousands of people trapped without food and water, a local pastor and Doctors Without Borders said on Tuesday.

That forced the closure of the nearby Varreux fuel terminal, according to a source familiar with the matter.

Two ships carrying imported fuel have been unable to unload their cargoes, and fuel trucks that distribute to filling stations are not approaching the terminal due to security concerns, said the source, who asked not to be identified.

The problem mirrors the situation that faced the country in October, when gang leader Jimmy “Barbecue” Cherizier – who is sanctioned by the United States for human rights abuses – led a blockade of the Varreux terminal to demand Henry’s resignation.

That led to critical fuel shortages that forced many businesses to close and hospitals to limit operations, until the gang blockade was lifted nearly a month later.

Cherizier, who had been keeping a low profile since late last year, appeared in a video circulating on WhatsApp saying that the current gang battles were part of an effort to improve security conditions in the country.

“We’ve chosen to launch the battle to free the country from the grip of kidnappers,” he said in the video, referring to rival gangs.