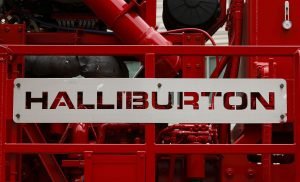 The largest provider of hydraulic fracking services used to complete shale oil and gas wells maxed out on its North American fracking equipment and crews. The business last year was in a standoff with oil producers, not adding new equipment until customers agreed to pay higher fees.

Pricing for its services has recovered, company executives said during a conference call, with operating income margins in its Completions and Productions division hitting 20.7%, the highest level since 2012.

It posted adjusted income of $656 million, or 72 cents per share, for the three months ended Dec. 31, topping the 67 cents per share estimate compiled by Refinitiv.

Halliburton also raised its first-quarter dividend by 33% to 16 cents per share.

Wall Street analysts said the results were positive, pointing to strong margins and focus on shareholder returns. Shares fell a fraction and were off less than 1% at $40.34.

Revenue in Halliburton’s North American division declined by 1% sequentially during the fourth quarter to $2.6 billion, driven primarily by weather-related disruptions in simulation and artificial lift.

Latin America revenue grew 12%, the largest jump across its geographical business units, to $945 million, driven by more pressure pumping in Argentina, activity in Mexico and well construction services in Colombia.

The company reported $366 million in impairments and other charges for 2022 due to the sale of its Russian business and the impairment of assets in Ukraine.