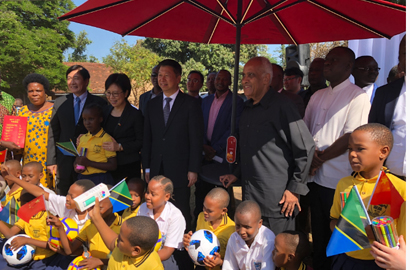 During the launch, the group promised to donate the first 100 Humbrellas this October.

“Lighting Africa” is a philanthropic project initiated by Hanergy and joined by China Foundation for Peace and Development this April in Beijing, aiming to provide environmental-friendly lighting devices to African Children to improve their reading time and help the electricity-deprived population in Africa.

The Wednesday event that had a Humbrella demonstrated in fully lit condition was witnessed by dignitaries such as Minister of International Department of Communist Party of China, Song Tao, President of Tanzania China Friendship Association, Hon. Dr. Salim.A.Salim, Hanergy Kenya Sales Directors Li Chuan and Zhang Xu, and over 700 local residents from Kagera Region along with teachers and pupils from the Oysterbay Primary School in Dar es Salaam, Tanzania.

As per International Energy Agency (IEA)’s report, with 880 million people living in insufficient electricity, power shortage has become an important factor that restricts the development of Africa.

Minister Song Tao said, “We hope more NGOs, enterprises, and individuals can join the cause of building a prosperous Tanzania, making the people’s lives better.”

“We hope ‘Lighting Africa’ Project could be a successful program at its first stop in Tanzania,” added Minister Song.

Donating the Humbrella, a path-breaking product from Hanergy, Mr. Li Chuan, Hanergy Kenya, Country Sales Director, said “At Hanergy, we’re steadfast to ensure the all-round development of Africa. We’re confident that the Humbrella will surely light up the lives of African children and facilitate the fast-paced development of Africa. Our Today’s step to donate Humbrella to Tanzania is the testimony of our commitment to helping the underdeveloped regions of Africa facing power shortage.”
“This is just the beginning of Hanergy’s philanthropy in Africa. We’re poised to bring more Humbrella to African continent”, he added.

Equipped with Integrated functions of off-grid power supply, electricity storage, night lighting and terminal charging, the newly unveiled product is expected to store as much as 40000 mAh electricity, ensuring a 10-hour high-quality reading time for children, or charging more than ten 3000mAh smartphones.