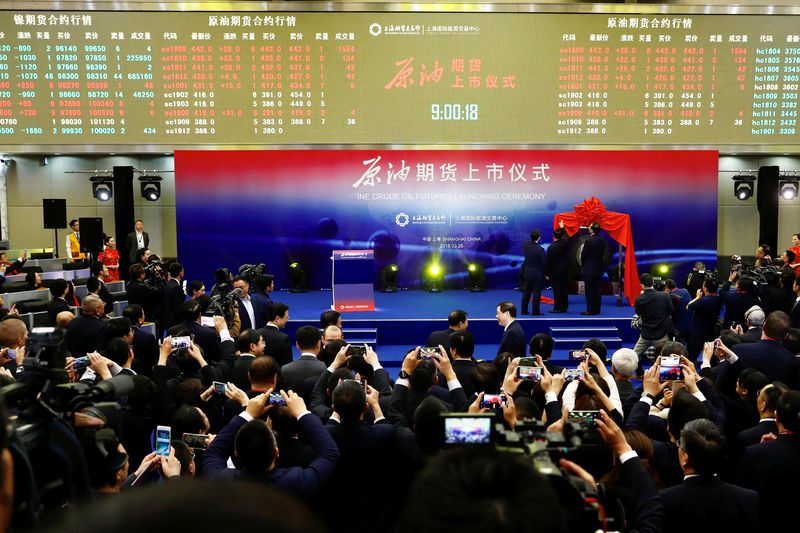 29 March 2018, Beijing — Shanghai crude oil futures slumped on Wednesday, the third day of trading since their launch, after heavy selling overnight, as traders scrambled to follow cues from the main international markets.

The big volumes done in the late evening in China underscore the complexity of trading the new contract when London’s Brent and WTI in the United States, are in full swing, with Shanghai’s relatively low liquidity exaggerating the price swings.

Over 34,000 lots of 1,000 barrels each of Shanghai crude changed hands in that time, more than half the turnover for the day.

The price drop was much steeper than those seen in Europe and the United States, where prices were down under 1 percent after data showed a surprising rise in U.S. crude inventories.

It was all the more jarring for many traders in China who rushed to catch up with the overnight action on Wednesday morning as Shanghai’s second session was starting at 9 a.m.

That highlighted concerns among many traders about the set-up of the contract, with the exchange splitting trading into three slots punctuated by long breaks, while Brent and WTI keep trading.

“It’s early days for Shanghai crude exchange. Long-term, it should have a good potential, but it would probably be good if opening hours were extended,” said Oystein Berentsen, director for crude oil trading at Strong Petroleum in Singapore, which specialises in China’s oil markets.

It was not immediately clear what caused the hefty drop, although some traders said it was due to a stronger yuan. A stronger yuan would make investing in the contract for holders of other currencies more expensive.

But the relatively low open interest, which measures contracts that have yet to be settled, caused big gyrations. On Wednesday, September open interest was 6,074 lots. The exchange counts both sides of the trade, which means it was actually 3,037 lots.

That compares with half a million lots for Brent.

“Given the limited liquidity and also the perception that the (Chinese) national oil companies are on the sell side, short-sellers were emboldened,” said a Beijing-based trader with a western trading house. “We are talking about only thousands of lots of open interest, not hundreds of thousands, that got people worried that deliveries would be an issue.”

Selling continued through the morning and afternoon sessions, with the contract falling almost 3 percent to a final settlement price of 414.1 yuan ($65.86) a barrel.