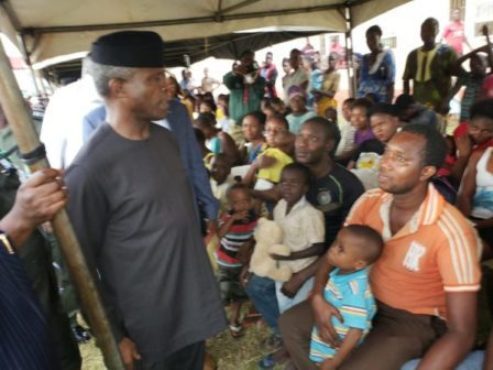 *Vice President Osibanjo during his visit to Asaba IDPs camp.

Secretary Ughelli north local government Doctor Johnson Uvovwriesewva who is also in charge of the camp at Uvweru appealed for more drugs for the camp, saying that the IDPs need to be treated regularly for malaria.

He said there had been no epidemic in the camp since it was set up, thanking the oil firm for the donation.

“What we want the government and other agencies to do for us is that they should provide money for us to purchase drugs because more and more people are coming here for medical services and we cannot drive them away. We also need money to transport our personnel who are coming to this place,” he said.

The Manager Community Development of the oil firm, Chief Williams Ebieroma said the donation was part of the firm’s Corporate social responsibility to its areas of operations, pleading that residents in flood-prone areas should follow periodic advice from government agencies on how to avoid challenges from flooding.

“We also want to advise Deltans who live in flood-prone communities to always heed to the warnings of the Nigerian Metrological Services and other emergency response organizations who have earlier warned about the flood. We want those who are still living in the various communities ravaged by flooding to come out and join those in the withholding camps. “, he said.