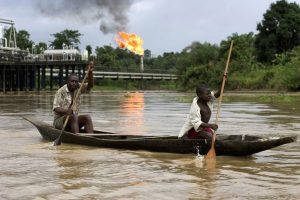 Port Harcourt — Traditional rulers in oil-rich Bayelsa State have said that until host communities benefit and have a say in the management of oil and gas resources in their domain, the Niger Delta region will not know peace.

The Chairman, Bayelsa State Council of Traditional Rulers Council, King Bubaraye Dakolo, Agada IV, who stated this, said host communities must actively participate in the oil and gas sector and its value chain as a panacea for peace in the region.

Dakolo, who is the King of Ekpetiama Kingdom, explained that it was morally wrong for the federal government to give out oil blocs to people who do not suffer the adverse effects of oil exploration and exploitation, without the consent of the indigenes who bear the brunt of crude oil production.

Speaking at the torch lighting of the Oil and Gas Stakeholders’ Festival, OGSFEST, 2022 in Yenagoa, the monarch regretted that Oloibiri where oil was first discovered in commercial quantity, and the Niger Delta have nothing to show for, six decades into oil and gas exploration and production.

“Let us manage what is ours, let us be a major voice in determining how to use what is ours and then everyone will go to sleep.

“You cannot take our kingdoms and give to other people in the name of oil blocs without our consent, knowledge, without our involvement and you want to sleep well, you can’t sleep well, it’s natural.

“We deserved to see 60years of oil in Ogbia Kingdom, in Bayelsa State and in the Niger Delta; we are tired of having our oil monies as refineries in Equatorial Guinea, as streets and hotels in Europe or stacked away in the Swiss Banks, and not available for our use,” Dakolo said.

Also speaking, Convener of OGSFEST 2022, Ms Onome Wilkinson, said the Oil and Gas Stakeholders’ Festival Torch Ceremony was designed as the flag off of the “OGSFEST Uyo 2022” to be held at the Akwa Ibom State capital in August.

Wilkinson said OGSFEST was imperative in order to promote peace, unity and a symbiotic relationship between host communities and the government towards achieving economic development for oil producing areas and the entire country.

She stated: “We will encapsulate under festive mood, a realistic view of the narrative of host Communities, the sincere efforts of the Government and the tangible socio-corporate interventions of both NOCs and IOCs towards the development of the oil rich Niger Delta region over the years.

“The festival amongst others will showcase essay competitions, epic dramas, colorfully packaged in a series of command performances by selected state cultural troupes, side by side with round table discussions on quite a number of plenaries bordering on environment, oil spillage, PIA and more.”