How petrol tanker fire destroyed properties worth billions in PH 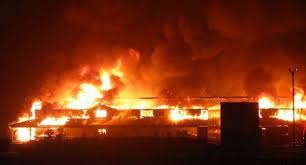 The incident, according to eyewitnesses, occurred this morning around 5 am, along G.U. Ake Road, at the foot of Eliozu Flyover, beside the Nigerian Airforce Base in Port Harcourt.

Properties razed to the ground by the fire incident include a 1000 seats capacity church, a multi-purpose event centre, a welding and fabrication workshop, an eatery, a horticulture, and landscape garden, among others.

*Scene of the incident.

An eyewitness, Chimenem Worlu, said the tanker which was laden with suspected illegally refined petroleum products, lost control, hit the road pavement and somersaulted spilling its contents, while trying to negotiate a sharp bend, following a hot chase by some security agents.

Worlu explained that it took the efforts of the Rivers State Fire Service to put out the fire many hours later, adding that this was the third time in the last one year, that a petrol tanker has felled at that spot, spill its contents and razing down properties.

According to him, “This morning around 5:00am we heard a loud bang and the next thing we saw was flames everywhere, although this is not the first time of such an incident happening, we witnessed a similar experience about three months ago but this time the fire was so much that we immediately called the fire service. 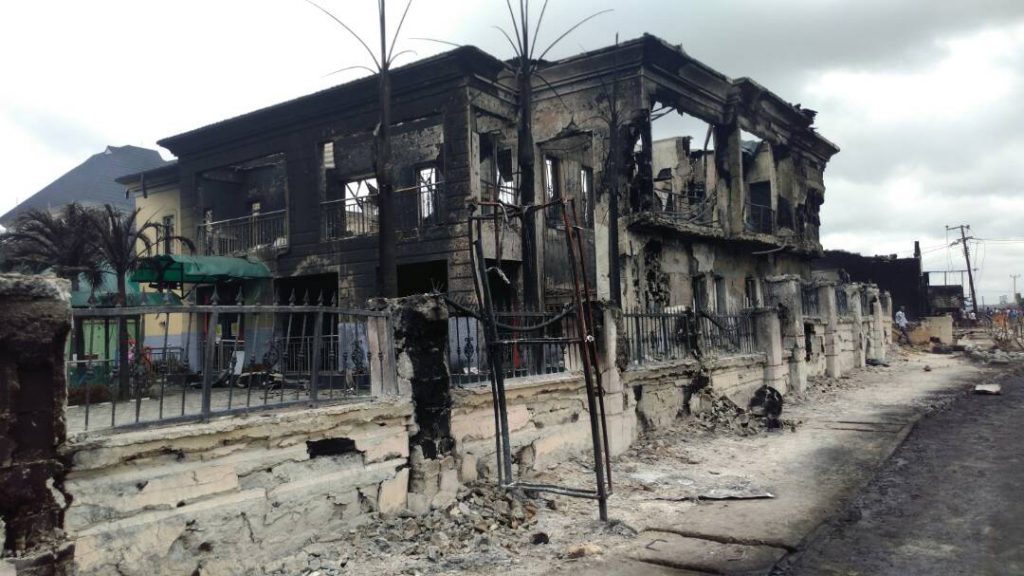 *Some of the buildings razed by the tanker fire.

“The Rivers State Fire Service appeared in the scene some hours later and helped to quench the fire using chemicals because the fire was much, as the diesel (adulterated) was moving on the ground that was how the fire followed and spread to most properties.”

Also speaking, a welder, Mr. Uduak Sunday, whose welding workshop was completely razed to the ground by the inferno, said he lost three welding machines, finished jobs and many other welding equipment worth millions of Naira.

“I came back from Umuahia yesterday and this early morning, I rushed to my workshop to pick up something to travel with and as I was inside my shop I heard a loud sound and I immediately jumped out to see what was happening, the next thing I saw was fire.

“I tried to pick some of my things but could not because the fire was huge, my heavy duty welding generator, two of my welding machines, two filling machines, and other tools were consumed in the fire, please let Rivers State Government help me, I don’t want to resort to unlawful means to survive,” Uduak said.

Meanwhile, the Rivers State Police Command as well as the Nigerian Security and Civil Defence Corps, NSCDC, has denied the claim that the petrol tanker incident was caused by a hot chase from security agents.

The Public Relations Officer of NSCDC in the state, Mr. Akin Oguntuase, said it is not true that its men were chasing the tanker because they have no need to chase a tanker since they have the apparatus to stop them.

“It is not true, if it is true the society would have lynched them (our men) for causing the incident. Besides, we don’t chase tankers. If we stop them they can’t run because we have the apparatus to stop them. So it cannot be true that our men were chasing the tanker.”

On his part, the Police Public Relations Officer in the state, Mr. Nnamdi Omoni, told our correspondent that he was not aware of the claim.

“I am hearing this claim for the first time. I am ignorant of it but I will make calls to ascertain the veracity of the claim, however, I am not conceding that it is true.”