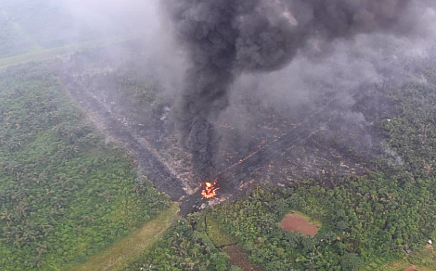 Port Harcourt — Not less than 40 corpses have been recovered from the scene of last Saturday’s fire explosion on a 2E pipeline network operated by the Petroleum Product Marketing Company, PPMC, in Komkom community,  Oyigbo Local Government Area of Rivers State.

This particular pipeline, our correspondent gathered is a highly vandalized line, from Komkom in Rivers State to Okwaza and Osisioma in Abia State, the pipeline is a beehive of illegal oil bunkering business and,  has exploded at different points in time killing people.

In October 2018, this same pipeline caused a fire explosion in Umuimo and Umuaduru communities in Osisioma Local Government Area of Abia state, leading to the death of at least 20 persons as confirmed by the Nigerian National Petroleum Corporation,  NNPC.

But a member of the pipeline surveillance team in Komkom community, who gave his name as Obinna Ameachi, who narrated the events that led to the fire explosion on Saturday, accused the Police of igniting the fire.

According to Ameachi, trouble brewed when some policemen in a stop-and-search operation accosted a young man carrying suspected illegally acquired products in jerrycans and upon efforts to make an arrest, the man ran into the Komkom swamp while policemen also pursued him into the bush.

Unbeknownst to the Policemen that people were already on the pipeline scooping PMS, which PPMC had pumped into the pipeline from PHRC to its Aba and Enugu depots, the policemen released some gunshot into the bush.

“The young guy has already escaped and ran into the bush, and left his jerrycans for the Police, why must the police chase him inside the bush. Why must the policemen fired any shot?” Ameachi queried.

Meanwhile, the fire was eventually put out on Sunday afternoon but reoccurred on Monday when the National Oil Spill Detection Agency, NOSDRA, and other stakeholders went for a joint investigative visit to the scene of the incident, thereby stalling the JIV.

NOSDRA Zonal Director, Cyrus Nkangwung, told our correspondent that the JIV will commence before the end of the week, to find out what caused the fire and the level of damages.

“Right now the JIV was inconclusive because we found heavy crude in the place that was dug for us to see the pipe, and we felt it was not safe to work there.

“As a regulatory body, we will go back again to ascertain the cause of the spill, the cause of the fire and then we will be able to say exactly what the issues are. For now, we cannot say anything until we have concluded the JIV.”

Similarly, the Rivers State Police Command has said information available to it showed that the explosion occurred when engineers were carrying out repair works on the pipeline in Komkom swamp.

Police Public Relations Officer, DSP Nnamdi Omoni, said the Commissioner of Police has launched a full-scale investigation on the incident and, anyone found culpable will be dealt with.

Omoni said he was yet to be briefed on the exact number of death toll but confirmed that many were injured. He said also said people who died in the explosion were villages who went to scoop the product.

“Investigation has been launched by the Commissioner of Police. We are yet to ascertain the cause. But what we were told is that engineers were working on the pipeline when a fire sparked an explosion occurred. And we were also told villagers went to the pipeline to scoop products.”

Corroborating the Police, the Chairman of Oyigbo Local Government Area, Mr. Gerald Oforji, who had earlier raised the alarm over the pipeline explosion said bodies of the victims were discovered after the fire was put under control.

Oforji, however, clarified that the fire explosion did not affect any building in the area.

“After we spent time there waiting for the fire to calm down so that we can penetrate for further confirmations when the fire actually came down, we confirmed that there were casualties, 10 were recovered on Saturday, while more corpses have been recovered between Sunday and today.

“As I speak, I can confirm to you that there has been lost of lives but no loss of properties because the incident happened inside the swamp. Maybe these people affected are people who went to scoop the products and they become unlucky. The fire did not actually destroy any property.”

Meanwhile, the management of Petroleum Product Marketing Company, PPMC and its parent company the Nigerian National Petroleum Corporation, NNPC, are yet to comment on the matter.