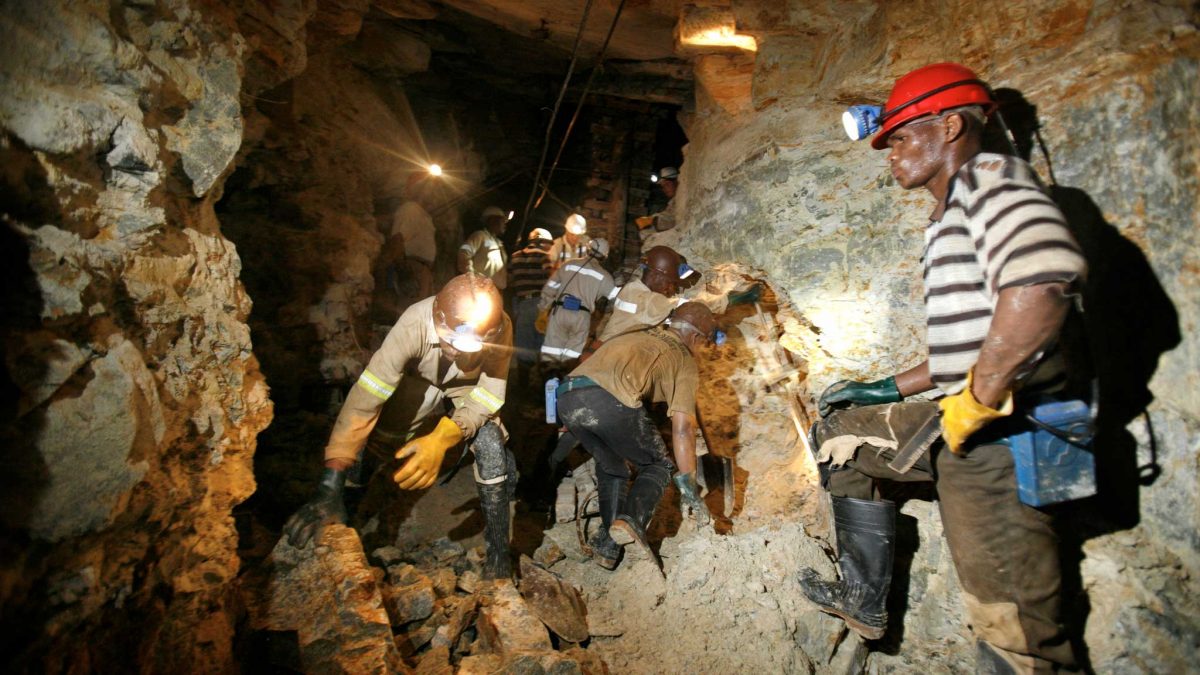 File copy; South Africa — TauTona gold miners (L) Martin Mohatakedi Mokoana, Moses Jambata Sonke, Caswell Mkhokeli Vanya Anale, Xolani Tyhafu Sonwaba work at chipping away an under twin in a 4M tunnel, 2.8 kilometers (1 3/4 miles) below the earth surface, one of the furthest parts of the world’s deepest gold mine. After traveling below ground shoulder-to-shoulder in three, 1 story elevators, the 150 miners travel by locomotive to their respective mine shafts. They then off-load and hike the rest of the way to climate controlled areas where they will work 8 hour shifts, 3 hours of which are break and travel. If not for massive air coolers, the workers would be digging in 130 degree Fahrenheit conditions, instead of a humid 85. | Location: Western Levels, South Africa. — Image by © Tom Fox/Dallas Morning News/Corbis

Although Eskom – which supplies around 90 percent of power in Africa’s most industrialised economy – paused the blackouts on Friday for the first time in five days, it warned that its creaking infrastructure could buckle at any time.

A decade ago, the state utility ordered mining houses to evacuate all underground staff and cease mining operations for five days as it cut electricity supply to minimum levels.

It is not clear how much the industry, which consumes about 15 percent of Eskom’s annual output, lost in production but the crisis sent prices of both gold and platinum to record levels and pummelled the rand.

But mining companies now appear to be better prepared to cope with the scheduled blackouts thanks largely to an agreement struck in 2010 between Eskom and the industry that allows it to continue operating on reduced power.

“The South African mines are probably a little bit better prepared for electricity cuts than they were 10 years ago,” said Peter Major, an analyst and director of mining at Mergence Corporate Solutions.

Anglo American Platinum Ltd (Amplats), the world’s top producer of the metal, said it lost 14,000 ounces or less than 1 percent of annual output – based on 2018 production – last week.

Diversified miners Exxaro and Anglo American said their operations were affected to varying degrees while AngloGold Ashanti said safety and production were untouched.

An industry group, the Mineral Council, did not give specific details about the impact of last week’s power cuts on production but said the effect on output for the sector had been minimal.

Miners including Impala Platinum, Harmony and Sibanye-Stillwater have also been working on reducing their reliance on Eskom by setting up their own power generators. However, it has been difficult to get that off the ground because of red tape and prohibitive costs, they say.

WHAT IS AT STAKE?

South Africa is home to the world’s biggest platinum group metals deposits, accounting for just over 90 percent of global production. Any disruption in output could directly affect prices of the white metal.

The mining industry directly contributes more than 7 percent to the economy which has been struggling with anaemic growth over the last 10 years.

Miners, among the biggest consumers of electricity in the country, are already grappling with weak profits that could be exacerbated by the potential loss of output if Eskom imposes deeper power cuts.

The potential impact on jobs is also a concern in a country with a jobless rate of more than 27 percent and has prompted fierce opposition from the country’s powerful trade unions to President Cyril Ramaphohsa’s plan to split the utility.

“With all these power cuts through Eskom there will be consequences … People will lose their work for less time put in for work and we are very, very concerned about this,” said Stanford Mazhindu, spokesperson of trade union UASA.

WHAT ARE MINERS DOING TO COPE?

The 2010 agreement between Eskom and the mining industry has partly shielded miners from the massive disruption caused by the 2008 power cuts, when the sector was forced to shut for five days to allow the grid to recover.

Under the scheme, Eskom gives the industry notice to reduce their power consumption by between 15 and 20 percent when the national grid is at its tightest and unable to meet demand.

“If it’s a 15 or 20 percent reduction in demand and it goes on for an extended period, it can have quite a big impact,” said Sibanye spokesman James Wellsted.

For instance, concentrators are switched off and water pumps that would prevent underground dams from flooding are only turned on during low usage hours at night, he said.

Impala Platinum reduces its usage of power-intensive equipment, including furnaces, during national peak usage times when residential consumers are just waking up or have just returned from work, spokesman Johan Theron said.

ARE THESE MEASURES ENOUGH?

Despite these measures, business leaders and the Mineral Council are still concerned about the risks Eskom poses to the industry.

Impala’s Theron said shifting energy-intensive work to an off-peak demand period in the middle of the night to catch up on lost production “is not ideal or sustainable, as it will impact the business over time in that wear on furnaces are accelerated under these operating conditions”.

WHY CAN’T MINERS GENERATE THEIR OWN POWER?

Attempts by miners to produce their own power are expensive, as Eskom requires them to connect to the grid for a fee.

The variety of legal codes found at the energy regulator and energy ministry are additional hurdles to independent power generation, they say.

The volume of electricity consumed by the industry is also too much to rely solely on self-generation.

“We need to fix Eskom, to think that underground gold mining can survive without Eskom is going to be difficult,” said Peter Steenkamp, the chief executive of gold miner Harmony.

However, a few companies have succeeded in cutting dependency on the grid. Petrochemicals firm Sasol produces 70 percent of its electricity needs to power its sprawling plants.

Power generation, from steam turbines commissioned in 2010 and contracted with Eskom via a medium-term power purchase programme, helped to alleviate Eskom’s shortages at the time, Sasol said.

But companies such as Sibanye are struggling to do the same.

The precious metals producer has pushed back plans, unveiled in 2014, to build a solar plant because of difficulty in getting finance for the project and bureaucracy related to connecting to the national power grid.

Harmony Gold has also been trying to build a 30 megawatt solar plant.

Amplats said it was also considering building a 100 megawatt solar power plant at the group’s Mogalakwena mine.