How to cope with $30 oil: producers ready more cuts 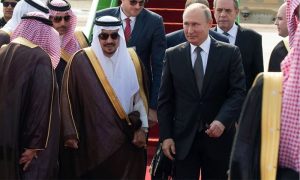 News wires — Already hard-pressed North American oil producers were contemplating a new round of spending and drilling cuts on Tuesday as they try to quell investor concerns about profitability with crude prices now almost half of what they were in January.

The launch of a price war between Saudi Arabia and Russia drove oil prices down by about a third on Monday, sending another shockwave through an industry that has been cutting costs since the 2014-2016 price collapse.

A source close to Chevron said that while it would not be easy to cut capital spending in an already tight budget, bosses would probably look to cut drilling rigs in the Permian basin in Texas, North America’s largest oilfield.

Research firm Rystad Energy predicted total industry spending on oil exploration and production would be cut by $100 billion this year and another $150 billion in 2021 if oil prices remained around $30 a barrel. The global benchmark was trading about $36.50 on Tuesday, up nearly 6% from Monday.

To cut costs, the U.S. shale industry would likely more than halve the number of wells it had originally planned to drill this year.

EOG said it was evaluating its drilling activity and that it is in the process of finalizing specific plans.

Marathon and Cenovus also promised to cut spending by about 30% from a year earlier.

At the heart of the collapse in oil prices are Russia and Saudi Arabia’s failure to continue their production curbs in place after this month. That has triggered a new price war with both countries betting they can supply the market at lower cost than U.S. shale rivals.

Shale production has soared over the past eight years, pushing U.S. output and exports to record highs, but that has come courtesy of strict limits on output which the Saudis rolled back after the collapse of OPEC talks on cuts last week.

The cost cutting will put more pressure on service companies like Halliburton, Schlumberger and smaller players like Packers Plus Energy Services that provide equipment as well as drilling and completion services to oil companies.

“If these oil prices persist, the only real discussion is whether or not to continue operations in North American land,” said Ian Bryant, Chief Executive Officer of Packers Plus Energy

“We had already given price concessions to protect market share, so we’re running close to breakeven in North America before the oil price crash.”