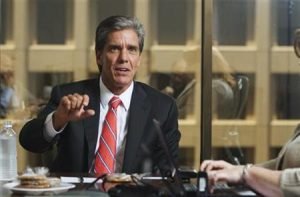 07 October 2017, Sweetcrude, Lagos — Shell’s former President, Marvin Odum has been appointed as an adviser on how to confront the immediate and long-term effects of crisis from the aftermath of Hurricane Harvey in Houston.

The appointment of the oilman came on the heels of the natural disaster which ravaged the city late August.

Odum, a native of Houston, is expected to advise on how to rebuild the town.

“The decisions that Houston makes about how it develops in the future are going to be decisions that affect businesses, and I hope that a businessman can make those tough calls,” said Brian Zabcik, an advocate at the group Environment Texas.

Aside from the Hurricane Harvey, storms in 2015 and 2016 have displaced people and destroyed hundreds of homes in Houston, adding to the conclusion that life-threatening weather will remain constant in the city.

Worsening the problem, Houston lost a third of its wetlands in the last three decades, reducing places for rainwater to settle before flooding.

Mayor Sylvester Turner who was the announcer of Odum’s appointment said the city has to change how it develops and that it has to invest in mitigation projects that could cost billions of dollars.

He said he hoped Odum would help create change and not just produce “a report” telling him what to do.

“There will be another storm. That is very, very clear,” Turner said. “The question will be whether or not we will take advantage of this moment to put us in a better position for the next storm that certainly will come.”

Turner cited Odum’s experience at Shell, where he worked more than 30 years and rose to president of its North American operations.

Odum led Shell through a disaster of similar magnitude, the 2010 Gulf of Mexico oil when an offshore rig owned by BP exploded and killed 11 people.

Millions of gallons of oil spewed into the Gulf for 87 days, destroying wildlife and disrupting the lives of thousands of people along the coast, prompting the U.S. government to order a moratorium on deep-water drilling in the Gulf for six months, shutting down a major element of Shell’s business.

Under Odum’s leadership, Shell sent its experts and equipment to help respond to the spill, said Bill Tanner, the company’s former head of media relations. Shell was among the first companies to be allowed to resume deep-water drilling almost a year after the spill.

Tanner said he watched Odum meeting with several executives of rival oil companies before they testified before Congress about the spill, in a hearing carried on national television. He said he saw Odum’s efforts to “bring down tensions” between the executives with a low voice.

“He brings a calming influence to otherwise chaotic situations, and he does so with a great deal of decorum and tact,” Tanner said.

Turner said Odum was preparing to start a new business venture when he called asking for help, and that Odum put aside that venture.

According to reports, Odum will not receive a salary in his new position, adding that he has an office at City Hall, Houston, where is already taking meetings with city departments and officials from other agencies, including John Sharp, who was appointed the state’s recovery czar.

Although he declined an interview request from The Associated Press, in written responses to questions sent by email, said he was working “nearly around the clock” already.

He said while the city already has “very strong capabilities,” Harvey has presented challenges on a “vastly different scale.”