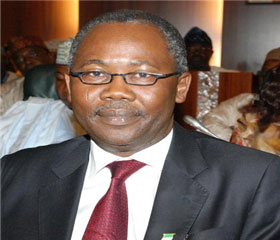 …Says he won’t return to Nigeria without concessions from govt
Oscarline Onwuemenyi, with agency reports
20 April 2017, Sweetcrude, Abuja – Former Attorney-General of the Federation and Minister of Justice, Mr. Mohammed Bello Adoke, has said he did not authorise the Malabu Oil deal, otherwise known OPL 245, but only conveyed the approval of then-President Goodluck Jonathan to all the parties involved in the transaction.

Explaining the genesis of the transaction, Adoke said: “The Malabu issue has been in existence since 1998. I want to take it from 1998 because I have seen that in recent times, the EFCC has taken up interest in the matter with a view to persecuting me.

“In order to make me look bad they have deliberately bifurcated the transaction and have chosen to present the issues from 2010 when I became involved in the settlement. However,the transaction started in 1998, when the military administration of General Sani Abacha came up with the policy of encouraging indigenous participation in the upstream sector of the oil and gas industry.

“They allocated oil blocks to indigenous companies on discretionary basis at a reduced signature bonus of $20 million. The beneficiaries include Malabu Oil and Gas Ltd, South Atlantic Petroleum Ltd (owned by Theophilus Danjuma) and Famfa Oil Ltd (Folorunsho Alakija). Malabu was allocated OPL 245 and they made a part-payment of $2 million for the signature bonus and brought in Shell as technical partners.

“Things seemed to be going on smoothly. Gen. Abacha died and Gen. Abdulsalami Abubakar came in, and things continued. And then he handed over power to Chief Olusegun Obasanjo in 1999.

“Sometime in 2001, due to circumstances not very clear but which the principal actors in government at the time can best explain, the federal government revoked OPL 245 from Malabu, whose beneficial owner was Chief Dan Etete, among others. It will be recalled that Etete was minister of petroleum when the oil block was awarded to Malabu in 1998.”

He added that, “The administration of President Obasanjo then invited some international oil companies (IOCs) to bid for the Block 245. Shell participated and won the bid. The signature bonus was now $210 million. Malabu felt short-changed that Shell, its technical partner, had acted irresponsibly.”

“Shell as technical partner to Malabu already had insider knowledge of the block. Malabu petitioned the house of representatives who then conducted a public hearing into the transaction and concluded that the revocation of the block from Malabu and reallocation to Shell was done mala fide (in bad faith) and declared it null and void. It therefore passed a resolution that the block should be returned to Malabu.

“Government did not comply with the resolution, so Malabu went to court and there was a series of litigation between Malabu and the FGN until sometime in 2006 when they entered into an out-of-court settlement which was subsequently reduced to a consent judgment of the federal high court, Abuja under the tenure of the then attorney-general of the federation, Chief Bayo Ojo, SAN.

“As a result of the agreement and all the conditions set out to be met by all parties, Chief Edmund Daukoru, who was then the minister of state for petroleum resources, wrote on behalf of the FGN, and on behalf of the president and commander-in-chief of the armed forces, and who incidentally was the minister of petroleum, Chief Olusegun Obasanjo, GCFR, to convey the decision to return the block 100% to Malabu in accordance with the terms of settlement.”

Meanwhile, Mr. Mohammed Bello Adoke, who is being investigated by the Economic and Financial Crimes Commission (EFCC) after being named as an alleged beneficiary in the $1.3 billion Malabu oil scam, has said he may not return home until he gets some concessions from the Nigerian government.

“I will definitely come back, if I have the assurance that they will not harm me, they will not humiliate me any further, they will respect the laws of the land,” Mr. Adoke said in an interview.

The EFCC said Mr. Adoke, who was AGF from 2010-2015, participated in the alleged fraud that marred the transfer of OPL 245 licence from Malabu Oil and Gas Limited to Royal Dutch Shell and Italy’s ENI.

Italian prosecutors also accused Mr. Adoke and 11 others, including ex-Petroleum Minister Dan Etete and Shell and ENI officials, of wrongdoings when the deal was struck in 2011.

The EFCC accused Mr. Adoke of being on the run, and the anti-graft office earlier this month sought a court order to compel him to appear for trial.

But Mr. Adoke said he would remain in The Netherlands, where he said he has been studying since 2015, unless there are competent assurances from Nigerian authorities that he won’t be humiliated.

“If I am arrested and granted bail, I hope they will obey the court and not treat me like they have been treating others, they will not scandalise me, and there will be no mob trial, media circus, certainly I will return,” Mr. Adoke said.

He, however, expressed doubts that the prevailing political atmosphere in the country could afford him such privileges after his return.

“But I will tell you something: that is not the environment that exists in Nigeria today. That is where my fear lies.

“Also, I cannot underestimate the extent to which those after me can go considering the enormous power and influence they have in the government of today,” Mr. Adoke said.

The former attorney general controversially approved the transfer of $801 million from a Nigerian government account into the private accounts of an ex-convict, Chief Dan Etete. A large part of the money is believed to have gone as kick-backs to officials of the Goodluck Jonathan administration, including the former president and Mr. Adoke. Both men have, however, denied the claims.

The $801 million was part of the total $1.3 billion Shell and ENI paid for OPL 245, considered one of the richest oil blocks in Africa. While $1.1 billion of the money was paid directly into a Nigerian government account in London, Shell had earlier paid about $200 million as signature bonus. It was the whole $1.1 billion that Mr. Adoke ordered be transferred into Malabu accounts controlled by Mr. Etete, but court cases in England by middlemen, stalled the full transfer.