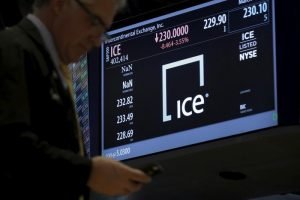 FILE PHOTO: A trader passes by a screen displaying the trading info for Intercontinental Exchange Inc. (ICE) on the floor of the New York Stock Exchange (NYSE) March 1, 2016. REUTERS/Brendan McDermid

The trade month will be December and the contract will be deliverable at Magellan Midstream Partners LP’s East Houston terminal, ICE said in a statement.

The primary U.S. futures contract is delivered at the storage hub in Cushing, Oklahoma, as has been the case since the contract was started in the early 1980s.

However, U.S. crude exports have surged after Washington lifted a decades-long ban, making Gulf Coast markets liquid and the sought-after destination for producers to send their barrels.

“Houston has become the pricing center for U.S. crude oil production and exports, and the new Permian WTI futures contract is designed to serve hedging and trading opportunities in this growing market,” ICE said in a statement.