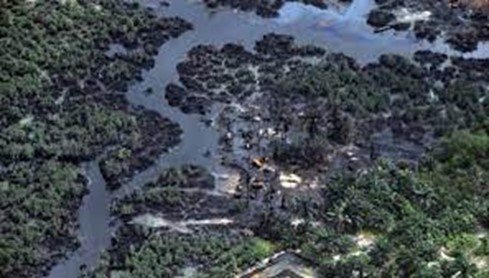 Port Harcourt — The Gbaramatu Youth Council, GYC, has vowed to shut down the activities of Chevron Nigeria Limited in Delta State before the end of this week, if the oil firm fails to conduct a Joint Investigation Visit, in the next few days, following an oil spill, allegedly from the company’s facilities.

The oil spill, which occurred about two weeks ago, according to the youth group, is from CNL’s 16” Makaraba-Utonana-Abiteye Right of Way, in Chevron’s western area of operations, Warri South West Local Government Area of Delta State.

Already, there has been sustained protest against the oil firm in Gbaramatu kingdom by women groups and some traditionalists, entering the 12th day, while it took the efforts of the Pere of Gbaramatu Kingdom, HRM Aketekpe Agadgaba, to evacuate the protesters from Abiteye, Otunana, Makaraba CNL platforms.

Speaking, the President of GYC, Shadrach Ebikeme, and Secretary, Comrade Ebike Asoh, warned the management of CNL that the JIV should be done involving only Gbaramatu Kingdom due to the fact that the spillage point was in Gbaramatu territory.

Ebikeme and Asoh, alleged that some staff members of Chevron Nigeria Limited were fueling an ethnic agenda and are up against the Gbaramatu position, which was likely to cause conflict.

The group warned that they will shutdown the operations of the oil multinational in Gbaramatu Kingdom, if the company fails to comply with their demands.

“The Gbaramatu Youth Council write to reiterate our position on the oil spillage in Gbaramatu Kingdom on CNL’s 16 inch Makaraba Otunana Abiteye Truck Line and to address some of the critical issues that are obviously slowing the pace of bringing about environmental justice to the good Ijaw people of Gbaramatu Kingdom.

“While we agree that there are impacted neighboring kingdoms affected by the oil spill as a result of the flow of the river which is natural, we make bold to uphold that the JIV should be done involving only Gbaramatu Kingdom due to the fact that the spillage point is in Gbaramatu territory, as such, involving other ethnic group in such defining investigation will only amount to undermine the territorial integrity of the Gbaramatu Kingdom.

“It is for this salient reason, the Traditional Council, through its Fiyewei, Chief Godspower Gbenekama, the Gbaramatu Chairmen Forum and the GYC have strongly reiterated this position at every given opportunity. And we the youths are firm to ensure that this position is followed up to the latter in the entire process of the JIV.

“We are also aware that there are certain characters within the top management rank of Chevron Nigeria Limited that are fueling their ethnic agenda and are up against the Gbaramatu position which is likely to cause conflict.

“Let it be known that the last Warri crisis between the Ijaws and the Itsekiris is quite fresh in mind and is not a befitting scenario to taste a repeat. It is on this note that we the youths of Gbaramatu Kingdom under the aegis of the GYC call on the Federal Government, the Delta State Government and CNL to call their General Manager of Policy, Government and Public Affairs, to order.

“Despite the order by the Pere of Gbaramatu kingdom, Chevron is seemingly trying to ridicule his efforts by refusing to timely conduct the JIV and this act of disrespect will certainly be resisted by the youths if the JIV is not conducted in few days. Few hours from now, after due consultation with relevant stakeholders, we shall cause a total shutdown of Chevron operation in the waterways which includes the shutting down of North IP Line.

“The Nigerian Federal Government, the Delta State Government and the general public should note that CNL is deliberately delaying the JIV because in its usual character, some of its top management staffs are making effort to contract hungry local youths to sabotage and tamper with the pipeline, in order to distort the evidence of its natural cause thereby depriving the Gbaramatu people from getting the environmental justice they deserve.”

Meanwhile, the management of CNL, has said that there has not been any indication that the oil sheen on water in Gbaramatu kingdom, was from its assets in Abiteye, Makaraba and Utonana fields or from any other CNL facilities as alleged.

CNL’s General Manager Policy, Government and public Affairs, Esimaje Brikinn, said the company has investigated and continues to survey its assets in the Abiteye and Utonana Fields, including the 16” Makaraba-Utonana-Abiteye Right of Way, and it was confirmed that there has been no spill emanating from any CNL’s assets.