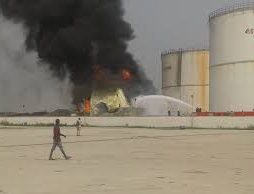 The Chairman of the Satellite Town Forum, Mr Michael Imitimi, made the call at an investigative hearing organised by an Ad hoc Committee of the House of Representatives on incessant explosions in the area, in Abuja.

According to him, the facilities pose a threat to lives and properties, insisting that the area was earmarked as residential area since 1975.

“In 2012, we started seeing the building of tank farms in the community, and this has caused us a lot of problems,” Imitimi said.

According to him, there is a short road that links the town, the tank farms and eight other villages near the town.

He explained that big trucks come in hundreds to the area and residents were at the mercy of the farm owners.

“The last incident that happened claimed lives, it is a very bad situation and we are appealing to the House not to allow a re-occurrence,” he said.

Imitimi appealed to the House to do the needful by relocating the tank farms.

Earlier, Mr Adebowale Olujimi, Chairman, Ijegun-Egba Tank-farm Owners and Operators Association, told the committee that the owners obtained approval from all relevant authorities before the farms were built in 2013.

According to him, in 2013, the association spent N13 million on access road rehabilitation and N350 million on road construction to the tank farms.

Olujimi explained that between 2014 and 2017, N147.5 million was spent for the rehabilitation of Marwa and Chipet roads in the area.

He said the association had spent two billion naira addressing pressing infrastructural deficit in the area, including a fire station.

According to Olujimi, with over two trillion naira in assets, coupled with the servicing of loans from various institutions, a relocation of the tank farm will be a great shock to investors and financial institutions.

He said 25 percent of national petroleum products come from the tank farms and recommended that the Marwa Road, which is the only access road, be expanded to ease traffic and enhance security.

Olujimi also recommended that a central fire station be established in Ijegun to further assure the community of security of lives and property.

The committee resolved to visit the area for assessment and reconvene another meeting to resolve the matter.