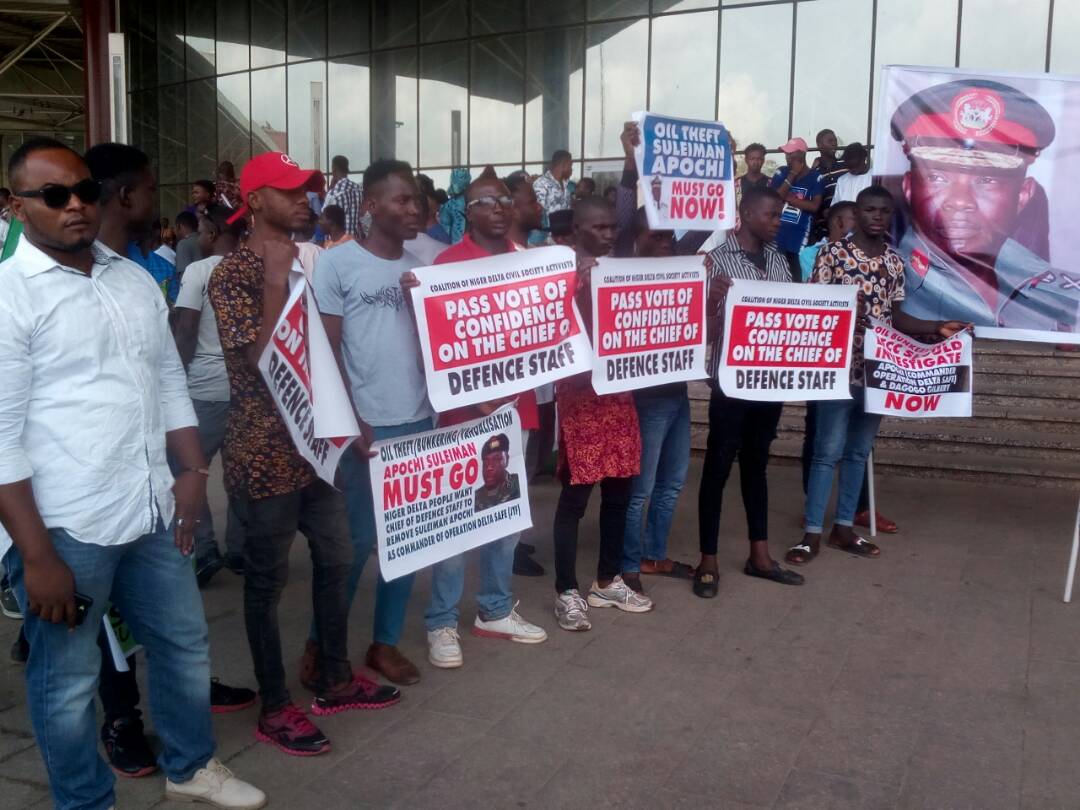 09 June 2018, Sweetcrude, Lagos, Nigeria — The management of Aiteo Eastern Exploration and Production Company has disputed claims linking it and its ownership to the sponsorship of protests and allegation of illegal bunkering against the Commander of Operation Delta Safe, OPDS, Rear Admiral Apochi Suleiman.

In a statement, the management of Aiteo explained that on June 1, 2018, hundreds of youths connected to the Niger Delta region organised a World Press Conference at Abuja within which one of the central themes was to draw attention to the activities of Rear Admiral Apochi Suleiman in his role as the OPDS, also known as Joint Task Force (JTF), Supremo.

“OPDS, which comprises of members of the Nigerian Navy, Army, Police, Nigeria Security and Civil Defence Corps and Custom Service personnel was designed to ensure the safety of lives and property in the Niger-Delta but with the continued unabated illegal oil bunkering activities which have translated into the loss of lives and attendant revenue to the tune of billions of dollars, allegations of complicity in the growing menace of illegal bunkering and oil thefts were made against him, and calling for his immediate removal from office.”

“For the avoidance of any doubt whatsoever, any attempt by the embattled Admiral Suleiman to suggest Aiteo’s (www.AiteoGroup.com) involvement in the activities of those who undertook the event or indeed any other related activity is a distraction designed to fail.

“It does not, in any way, detract from the weight of allegations with which Admiral Suleiman has been publicly confronted nor the overwhelming need for him to engage in a process that will allow him to deal with the substantive issues that flow from that event.

“Aiteo has enormous responsibilities in the oil industry requiring focused intensity and attention in the execution of our quite considerable commercial obligations. With a daily production in the region of 90,000 b/d, the NNPC/Aiteo JV is now directly responsible for producing 5% of the country’s daily oil production. In doing so, the group employs over several hundred direct staff and thousands of others indirectly through contractors and service suppliers. This sense of responsibility is the bedrock on which our commercial and other activities are founded. Sadly, these oil thefts have meant that we are one of the biggest victims of oil theft in the country.

“As the opportunity regretfully presents, we consider it apt to clarify a number of “matters arising” from the Admiral’s unfortunate comments:

“As a result of recurrent thefts along the NCTL pipeline route resulting in significant pressure reductions on the trunk line, theft points identification as well as illegal refineries, and corroborated by several Joint Investigative visits constituted by various regulatory bodies and the applicable host community, Nigeria has experienced loss of production and revenue that should have accrued to the country. In Dec 2016 alone, 45.46% of the total net crude injected into the NCTL was lost on this basis which implies that the country lost revenues that could have been accrued to the country’s treasury from crude sales.

“Third party interference with the line has often resulted in oil leaks which ultimately culminate in shutting down the NCTL to undertake emergency repairs. This in itself has resulted in the NCTL being shut down for about 145 days and an approximate deferment of 50.386 million barrels of Crude Oil (Net) for the 6 injectors into the NCTL since Aiteo took over the operatorship of the Trunkline in September 2015.

“Due to the continued vandalism on the NCTL and resulting oil theft, Aiteo has written to the Federal Government, through the Chief of Army Staff, General T.Y. Buratai on two occasions (April 17 and 23, 2018), requesting the involvement of the Armed Forces in reinforcing existing security arrangements for the pipeline as the incessant security breaches were resulting in losses amounting to billions of Naira for the country. We have made similar efforts with various other arms of the security apparatus of the country.

“Aiteo is very concerned, not just about the effect of these disruptions on its bottom-line, but the health and livelihood of people living in these areas. This tragic trajectory is not only condemnable but inimical to human existence, in the long term.

“Some of these issues are captured in recurring questions that may even have been articulated by those communities complaining about the OPDS’ role as follows:

“Nigeria cannot afford to remain passive as our sovereign wealth is being aggressively pilfered, aided by indifference on the part of relevant stakeholders. These activities are highly injurious to the economy of a country vacillating between recession and the fringes of economic stability. As a major indigenous producer, Aiteo identifies with issues about which the communities rightly complain.

“Although – and again we make this abundantly clear – we have NOT instigated them to participate in any protest, we believe the object of their complaint about the persistence of illegal bunkering remains germane. All hands must be on deck to diminish and extinguish the theft of oil across the NCTL and other such national facilities and its attendant implications.”

As a socially responsible organisation, Aiteo understands that the community bears the brunt of illegal bunkering and refining activities. Indigenes of these communities remain morally and legally free to exercise their constitutionally guaranteed civic rights to peacefully protest against ills in their community till their voices are heard and desired remedial or corrective actions are taken.

Aiteo utilizes this opportunity to reiterate its long-standing commitment to due process and international best practices in the discharge of every aspect of its statutory mandate.