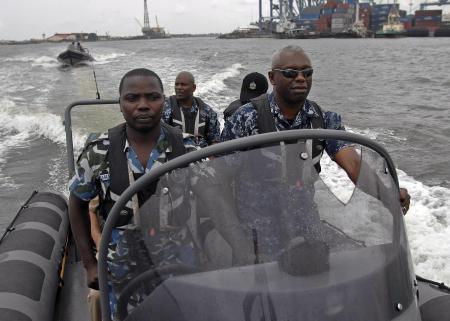 Port Harcourt — The Nigerian Navy Ship, NNS, Pathfinder, Port Harcourt, has handed over a vessel allegedly used for illegal bunkering to the Nigerian Maritime Administration and Safety Agency, NIMASA.
The vessel, MV Dandellan Grace, according to the Navy, had its automatic identification system, AIS, transponder switched off by the crew members to ensure the vessel remain hidden from detection by security agencies.
First Lieutenant, NNS Pathfinder, Capt. Suleiman Mohammed, said the vessel was granted approval to load AGO from Tonimas Storage and discharge the content at Julius Berger Yard in Port Harcourt.
Mohammed explained that after lifting the diesel, it was discovered that the vessel had its AIS transponder switched off from September 29, 2020, to September 30, 2020.
The Navy Captain said development aroused suspicion that the vessel might have proceeded in stealth mode to enable it to engage in illicit activities.
He added that the suspicion that the vessel might have indulged in illegal bunkering was further confirmed when Julius Berger rejected the petroleum product supplied to it.
“Julius Berger rejected the diesel because it did not meet the specification of the Department of Petroleum Resource. Consequently, the vessel was detained by the NNS Pathfinder for further investigation.
“However, a confirmatory laboratory test conducted by the DPR during the investigation revealed that the petroleum product was within the specified range for diesel.’’
Mohammed further said that although the test result came negative, MV Dandellan Grace was still found culpable for AIS infractions.
He explained that the sailors’ action violated the Safety of Lives at Sea Regulations mandating vessels to always operate with their AIS transponder switched on.
He said: “The crew members’ action endangered the navigational safety of other ships, vessels and commuters at sea.
“The general public is assured that the Nigerian Navy has several maritime domain awareness facilities capable of monitoring and detecting erring vessels within Nigeria’s waters and beyond.
“To this end, there is no hiding place for seafarers that habitually violate maritime laws’’.
Receiving the vessel on behalf of NIMASA, an Assistant Chief Cabotage Officer, Mr. Joseph Baregha, said the agency would conduct a speedy investigation to determine why the vessel’s AIS transponder was switched off.
Baregha assured that the agency would prosecute anyone found culpable.