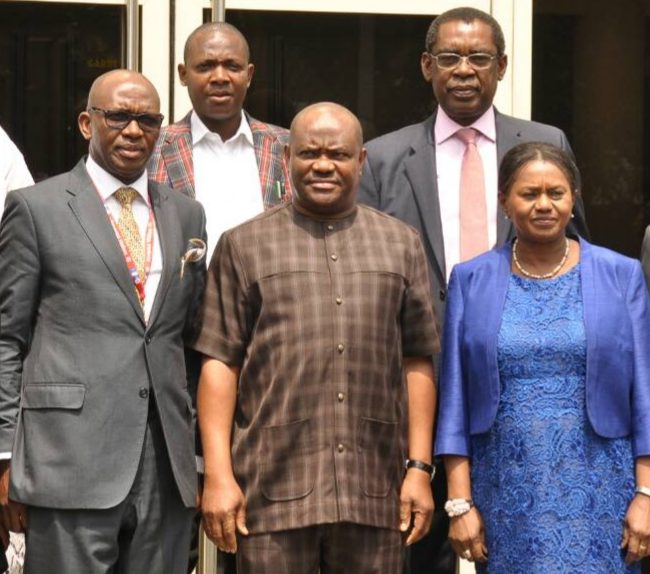 Governor Wike also berated the Federal Government for failing to release her counterpart fund of N60 billion for the execution of the Bonny-Bodo road project.

Speaking when he granted audience to the management of the Nigerian Liquified Natural Gas, NLNG, at the Government House Port Harcourt, the governor said that the inability of the Federal Government to treat all sections of the country fairly is generating tension.

He said that Bonny and the adjoining towns produce a great percentage of the country’s wealth, yet they have been denied quality road infrastructure.

“We produce the oil that makes Nigeria survive, yet the road leading to Bonny Island is a source of politics.

“The failure of the Federal Government to release her counterpart fund for the Bodo-Bonny has made it difficult for construction works to begin.”

The governor stated that the recourse to the piecemeal annual budgeting process would stall the project. He charged the Federal Government to take funds from the Excess Crude Account to pay her counterpart fund.

The governor charged the NLNG to improve her corporate social responsibility to her host communities, saying that “such investments should also accommodate Omoku and Kalabari communities, which supply gas to Bonny.”

He commended NLNG for the construction of their head office in Port Harcourt, saying that all oil companies should be domiciled in the Niger Delta.

In his remarks, the Managing Director of NLNG, Mr. Tony Attah informed the Rivers State Governor that the NLNG Train-7 will become a reality in 2018.

He said that the work on the project will be flagged off by the Rivers State Governor.

The Managing Director also disclosed that work has reached advanced stage on the construction of the headquarters of the NLNG in Port Harcourt.