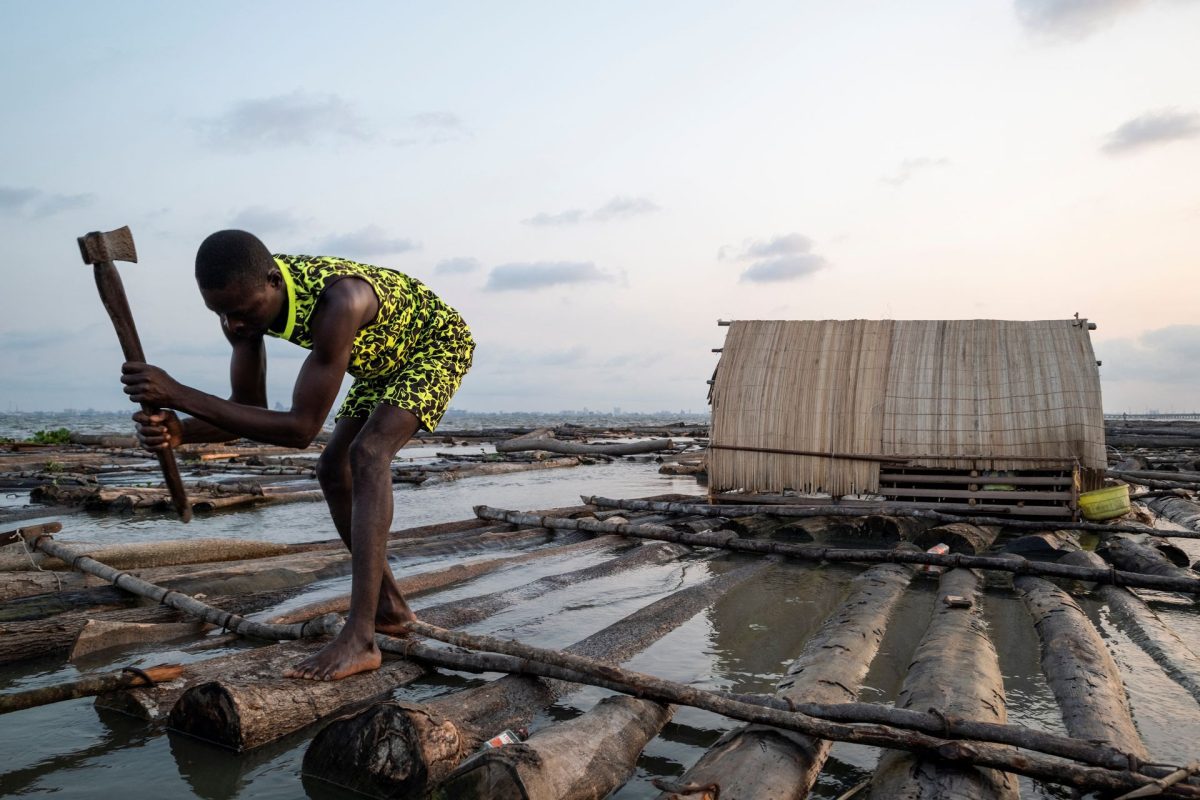 *Logger, Bolaji Ikuejamoye, uses an axe to fasten a loose joint on his raft, in transit from Ondo State to Lagos State, Nigeria, December 1, 2021. Logs are made into rafts and transported together through local water channels from different parts of the country to Lagos, the commercial capital of the country. REUTERS/Nyancho NwaNri

Ondo State, Nigeria — Deep in a forest in Nigeria’s Ebute Ipare village, Egbontoluwa Marigi sized up a tall mahogany tree, methodically cut it down with his axe and machete, and as it fell with a crackling sound, he surveyed the forest for the next tree.

Around him, the stumps dotting the swampy forest were a reminder of trees that once stood tall but are fast disappearing to illegal logging in Ondo state, southwest Nigeria.

“We could cut down over 15 trees in one location, but now if we manage to see two trees, it will look like a blessing to us,” the 61-year-old father of two said.

From 2001 to 2021, Nigeria lost 1.14 million hectares of tree cover, equivalent to a 11% decrease in tree cover since 2000 and equal to 587 million tonnes of carbon dioxide emissions, according to Global Forest Watch, a platform that provides data and monitors forests.

After felling the trees, Marigi put markers on them, a message to other loggers that he is the owner. The logs would be transported via creeks and rivers all the way to Nigeria’s commercial capital Lagos.

“During the time of our forefathers, we had big trees but sadly what we have now are just small trees and we don’t even allow them to mature before we cut them,” Marigi said.

Cutting down trees for logging, opening up farmland or to feed energy demand for a growing population is putting pressure on Nigeria’s natural forests.

President Muhammadu Buhari told a COP15 meeting in Abidjan, Ivory Coast on May 9 that Nigeria had established a national forestry trust fund to help regenerate the country’s forests. That may not be enough as the country loses forests at a faster pace.

“Protecting the forest means protecting ourselves. When we destroy the forest, we destroy humanity,” said Femi Obadun, director of forest management for Ondo state’s agriculture ministry.

It’s something Marigi knows all too well, but his priority is to eke out a living.

Months after cutting the trees, Marigi returns to the forest to pull the logs together and fasten them into rafts. He has a collection of more than 40 logs.

With other loggers, they have put together money to hire a tugboat to pull the rafts through creeks and rivers from Ondo state to Lagos.

Makeshift shelters on the rafts are made from wood and help shield Marigi and his friends from the weather. Food is shared while they belt out local folk songs to lift spirits.

“We don’t sleep at night during the journey. We monitor the logs and make sure that (they don’t) detach from the tugboat,” Marigi told Reuters.

The boat stops at several locations to pick up more loggers and their rafts. A single boat can carry up to a thousand rafts, each containing as much as 30 logs.

Marigi’s journey ends at a lagoon in Lagos, where rafts from Ondo state and other parts of the country converge and the logs are processed at sawmills and sold to different users.