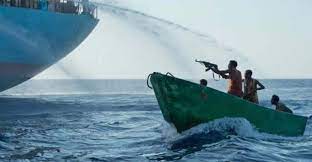 *Attacks on vessel at anchorage

Lagos — STAKEHOLDERS have lamented the growing attacks on vessels at berth and anchorage a development that is beginning to raise concern for both ship owners and crew.

While speaking on the development, a former Director-General of the Nigerian Maritime Administration and Safety Agency, NIMASA, Temisan Omatseye, has advised the agency to prioritise intelligence gathering to combat frequent attacks on ships at anchorage.

Omatseye said the current Director-General of NIMASA, Dr. Bashir Jamoh, had said that Nigeria recorded 27 incidents of armed attacks and piracy against ships at port anchorages in various parts of the country.

Omatseye said, “Usually, whenever there are attacks on ships at anchorages, most times, those attacks are from criminals in communities around those anchorages. And one of the ways to tackle and win them once and for all is for a collaboration to take place between NIMASA and intelligence units of the DSS (Department of State Security), Navy and the Nigerian Army.

“Whatever intelligence these security agencies gather would now be submitted to NIMASA which would definitely inform their decision on that challenge. The intelligence would enhance an absolute victory over the criminals.”

Omatseye also advised NIMASA “to pay to get information from trusted dwellers” of communities around the anchorages.

“These would serve as whistleblowers to also aid intelligence gathering. Without a doubt, some of these dwellers know who the criminals are. Hence, they would aid successful security operations of the collaborated security agencies,” he added.

Similarly, the Chairman of Ogogoro Village Mr. Sagay Ayodele confirmed the development saying that most of the attacks were usually carried out by stowaways from both the community and outside the community