Lagos — Indonesia is expected to witness 119 oil and gas projects commencing their operations across value chain during 2021-2025, accounting for 6% of the total project starts in the Asia-Pacific (APAC) region. Out of these, new build projects lead the upcoming counts constituting around 78% of the total starts across the value chain, according to GlobalData, a leading data and analytics company.

GlobalData’s report, ‘Asia Pacific Oil and Gas Projects Outlook to 2025 – Development Stage, Capacity, Capex and Contractor Details of All New Build and Expansion Projects’, reveals that of the 119 projects, upstream projects would be 36, midstream projects 27, refinery 11 and petrochemicals would be the highest with 45 projects.

Teja Pappoppula, Oil & Gas Analyst at GlobalData, comments: “Indonesia is heavily focusing on gas projects as part of plan to double the production by 2030 and become one of the major exporters of gas in the world. It is also investing on petrochemicals projects to meet the growing demand in Southeast Asia.”

In refineries, the 300 thousand barrel per day (mbd) Tuban II is a key project expected to start operations in 2025. It is an integrated refinery project to be operated by PT Pertamina Rosneft Processing and Petrochemicals. 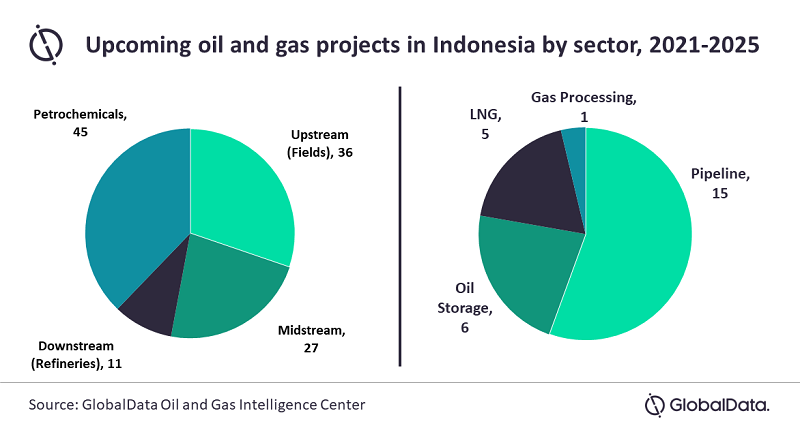 Among the upcoming petrochemical projects in Indonesia by 2025, Shanghai Huayi Company Bintuni Methanol Plant is a key project with a capacity of 1.8 million tons per annum (mtpa). The new build plant is presently in the construction stages and is expected to start operations in 2021.