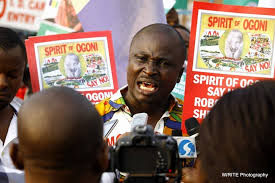 Port Harcourt — Alarming rate of insecurity and cult wars in Ogoniland will impede the delivery of the ongoing implementation of UNEP Report, as well as hinder the planned resumption of oil exploration activities in the area, a pan-Ogoni group said.

The Conscience of Ogoni People, who disclosed this in a letter to President Muhammadu Buhari on Friday, regretted that insecurity in Ogoniland has worsened, up to a point that communities are now on exile.

Leader of the group, Chief Gani Topba, tasked the President to direct the Chief of Army Staff and other service chiefs into drafting a special Joint Task Force to Ogoniland to uproot and dislodge the criminal elements as well as to mop up all illegal arms in the area.

Topba believed that the grave security situation in Ogoniland calls for extraordinary measures, if peace must be restored to the land.

He recalled that Ogoni people have resolved to allow the Federal Government free access to re-enter Ogoniland for the resumption of oil operations, immediately after the Government might have posthumously overturn the conviction of Ken Saro-Wiwa and eight others executed in 1995.

“Despite these promising partnerships with the Federal Government to develop Ogoniland, insecurity has worsened. Today, several Ogoni communities are on exile. Businesses have closed down as the people now live in fear of the unknown as decapitated bodies litter the streets of Ogoni communities.

“If this escalating insecurity is allowed to persist, it will impede the timely delivery of the UNEP Report implementation programme currently being implemented by your administration in Ogoniland.

“More importantly, the festering of insecurity in Ogoniland will portend grave danger to the economic interest of the Federal Government of Nigeria as it will prevent the NPDC from taking over the operatorship of OML 11 as promised by Ogoni people.

“It is beyond controversy that no meaningful development can take place in an atmosphere of insecurity and upsurge of criminal activities.

“Against the foregoing background, we request Your Excellency to direct the Chief of Army Staff and other service chiefs to swing into action by drafting a special Joint Task Force to Ogoniland to uproot and dislodge the criminal elements as well as to mop up all illegal arms, in order to restore peace and security to Ogoniland for the greater good of the country.

“In view of the sufferings of the Ogoni people in the hands of these criminal elements, we assure you that the people are willing to offer Joint Task Force the support and co-operation needed to rid Ogonilland of criminal elements.”