Iran falls to sixth biggest oil supplier to India in November, from fourth in October 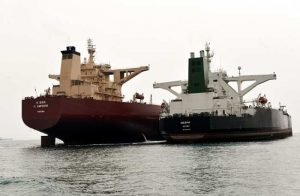 14 December 2018, News Wires — India’s monthly oil imports from Iran plunged to their lowest in a year in November with Tehran dropping two places to become only the sixth biggest supplier after New Delhi cut purchases due to the impact of U.S. sanctions, according to ship tracking data and industry sources.

Last month, the United States introduced tough sanctions aimed at crippling Iran’s oil revenue-dependent economy. Washington did, though, give a six-month waiver from sanctions to eight nations, including India, and allowed them to import some Iranian oil.

In November, India imported about 276,000 bpd of Iranian oil, a decline of about 41 percent from October and about 4 percent more than the year-ago month, ship tracking data obtained from shipping and trade sources showed.

After abandoning the 2015 Iran nuclear deal, U.S. President Donald Trump is trying to force Tehran to quash not only its nuclear ambitions and its ballistic missile program but its support for militant proxies in Syria, Yemen, Lebanon and other parts of the Middle East.

India’s imports from Iran in November, included some parcels that were loaded in October. In November, Iraq and Saudi Arabia continued to be the top two oil sellers to India.

Nigeria continued at No. 5 position, while Iran slipped to sixth place.

“Iran do not have vessels to export oil on time … some November loading vessels will arrive in December,” said an industry source, with knowledge of the matter.

Local and international shippers are not carrying Iranian cargoes despite India winning a waiver, this source said. The key problem is that while India can import Iranian oil without falling foul of Washington, that may not apply to a shipping company signing a new delivery contract.

Instead, India is relying on Iranian tankers for crude imports and Iran is using many of its vessels for crude storage.

The sources declined to be identified citing the confidentiality of the numbers.

Indian refiners, wary of the impact of U.S. sanctions, had boosted imports from Iran ahead of their introduction, with imports averaging about 563,000 bpd in April-November, a growth of about 32 percent from a low base in the previous fiscal year, the data showed.

(For an interactive graphic on ‘India’s Oil Imports From Iran’ click tmsnrt.rs/2SIFkfF)

In the previous financial year to March 2018 India had cut oil imports from Iran due to a dispute over development rights of a giant gas field.

Iran was hoping to sell more than 500,000 bpd of oil to India in 2018/19, its oil minister Bijan Zanganeh said in February, and had offered almost free shipping and an extended credit period to boost sales to India.

Government sources say Reuters’ calculations showing India’s oil imports from Iran in this fiscal year would be higher than the 452,000 bpd, or 22.6 million tonnes, it imported in the previous year, are correct.

During January-November this year India’s oil imports from Iran rose by an annual 18.4 percent to 552,000 bpd, the data showed.