Iran says it will keep exporting oil despite U.S. pressure 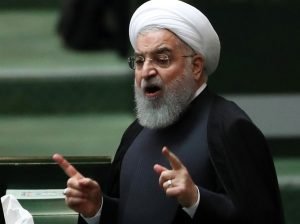 “America’s decision that Iran’s oil exports must reach zero is a wrong and mistaken decision, and we won’t let this decision be executed and operational,” Rouhani said in a speech broadcast live on state television.

“In future months, the Americans themselves will see that we will continue our oil exports.”

Oil prices hit their highest since November in recent days after Washington said all waivers for sanctions-hit Iranian oil would end this week, pressuring importers to stop buying from Tehran and further tightening global supply.

The United States demanded on April 22 that buyers of Iranian oil stop purchases by May 1 or face sanctions, ending six months of waivers that had allowed Iran’s eight biggest customers, most of them in Asia, to import limited volumes.

Rouhani said if the United States can block one method for Iran to export oil, Tehran will find other ways to do so.

Trading in crude oil is state-controlled in Iran, but to try to work around U.S. sanctions, the government last year started selling to private buyers through the exchange.

Also Read: Anadarko’s weak performance in U.S. Permian made it a takeover target

Anadarko’s weak performance in U.S. Permian made it a takeover target

Fars news agency reported that 70,000 barrels were sold at $60.68 a barrel. Iran does not reveal the identity of private buyers on the energy exchange because they might be targeted by U.S. penalties.