Iran says new sanctions would not stifle its oil industry 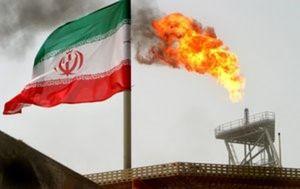 A gas flare on an oil production platform is seen alongside an Iranian flag in the Gulf. REUTERS/Raheb Homavandi/File Photo

08 May 2018, News Wires – U.S. President Donald Trump has threatened to pull out of the Iran deal by not extending sanctions waivers when they expire on May 12 unless European signatories of the accord fix what he calls its “flaws”.

“They cannot stop Iran. Our oil industry’s development will continue even if new sanctions are imposed on Iran,” SHANA quoted Gholamreza Manouchehri, deputy head of the National Iranian Oil Company, as saying on its website.

Sanctions imposed on Iran in early 2012 by the United States and European Union over its nuclear program cut Iran’s crude exports from a peak of 2.5 million barrels per day (bpd) before the sanctions to a little more than 1 million bpd.

But Iran re-emerged as a major oil exporter in January 2016 when international sanctions were suspended in return for curbs on Iran’s nuclear program.

“These contracts will be finalised under the current challenging circumstances by mid-Iranian year (October) … This planning has been made with the assumption of delayed presence of Western companies,” he added.

Major European companies, partly fearing harsh penalties because of the remaining U.S. sanctions on Iran, have been reluctant to do business with Tehran, which needs to attract over $100 billion in foreign investment to boost its crude output.

France’s Total became the first Western energy firm to sign a deal with Iran after the easing of international sanctions in 2016, agreeing to develop Phase 11 of the South Pars offshore gas field with a total investment of $5 billion.

Deputy Oil Minister Amirhossein Zamaninia also said that Iran considered the deal alive “if we can continue to sell our oil and its products”, even if the United States pulls out.

“Also, we should be able to maintain Iran’s oil market, receive our oil money and secure foreign investment in our oil industry,” he added.

Iran says it aims to raise its crude oil production capacity to 4.7 million bpd within the next four years, though exports might be disrupted if Trump refuses to renew Iran’s sanctions waivers next week.

The Organization of the Petroleum Exporting Countries (OPEC), Russia and several other producers began to reduce oil output in January 2017 in an attempt to erase a supply glut and prop up prices. They have extended the pact until December 2018, and meet in June to review policy.

“We back OPEC’s decisions under normal circumstances … But Iran always gives priority to its own interests … whoever produces more oil has more power in the market,” Zamaninia said.

The world’s largest crude exporter has consistently opposed Iran’s nuclear deal, fearing that it will strengthen Iran economically and allow it to increase funding for proxy conflicts in Lebanon, Syria, Iraq and Yemen.

“Saudi officials want to limit Iran’s oil market … This is a fight over controlling the crude market,” Zamaninia said.

Saleh Hendi, head of the NIOC’s exploration organization, said 14 exploration blocks were also scheduled to be tendered in July.

“Of the 14 exploration blocks, six blocks, for which development agreements will be signed, are expected to be attractive to foreign investors,” Hendi said.