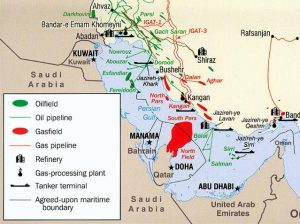 Dubai — Iran is to launch four new phases at South Pars, the world’s largest gas field, with a production capacity of up to 110 million cubic metres per day, the oil ministry said on Twitter on Tuesday.

No additional information was provided on when the four phases would be launched.

The offshore field is shared between Iran and Qatar, which calls it North Field.

The oil ministry’s news agency SHANA quoted a project manager in South Pars phase 13 as saying on Tuesday that a gas refinery in the field was fully operational and ready to be inaugurated by President Hassan Rouhani.

“The refinery of the phase is fully operational … The first shipping of gas condensate from phase 13 was delivered on March 11 for export,” said Payam Motamed, operator of the South Pars phase 13 project, adding that the refinery had the capacity to process 56.6 million cubic metres of gas a day.

He said around $5 billion was invested for the development of the field’s phase 13 and that the value of the daily products from it was $5 million.

Iran needs foreign investment to boost output from its oil and gas reserves because production has been crippled by years of Western sanctions.

A manager at National Iranian Oil Co (NIOC) said on Tuesday there were 200 undeveloped oil and gas fields in Iran.

“The recovery rate of Iranian fields is 10 percent lower than the average rate of recovery in the world,” Karim Zobeidi, NIOC’s deputy for planning, was quoted as saying by SHANA.

The chief executive of NIOC, Masoud Karbasian, was also quoted as saying by SHANA that the company would issue 20 billion rials ($476,000) of fixed-rate (Manfa’at) bonds on March 13.

The bonds will help finance the development of NIOC’s oil and gas projects, Karbasian said, and be sold at Fara Bourse, an over-the-counter market for securities in Tehran.

France’s Total and China National Petroleum Corp suspended investment in South Pars last year after the United States threatened to impose sanctions on companies that do business in Iran.

The United States reimposed sanctions on Iran’s energy and banking sectors after Washington withdrew from a 2015 nuclear agreement between Tehran and world powers.

The agreement had imposed limits on Iran’s nuclear ambitions in exchange for sanctions relief.