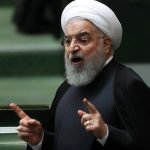 London — Iranian President Hassan Rouhani signaled on Wednesday that talks with the United States might be possible if Washington lifted sanctions, days after U.S. President Donald Trump said a deal with Tehran on its nuclear programme was conceivable.

Washington withdrew last year from a 2015 international nuclear deal with Tehran, and is ratcheting up sanctions in efforts to shut down Iran’s economy by ending its international sales of crude oil.

Rouhani said in remarks carried by state television: “Whenever they lift the unjust sanctions and fulfill their commitments and return to the negotiations table, which they left themselves, the door is not closed.”

“But our people judge you by your actions, not your words.”

Iranian Foreign Ministry spokesman Abbas Mousavi said on Tuesday that Iran saw no prospect of negotiations with the United States.

Tensions have risen between Iran and the United States since Washington deployed military resources including a carrier strike group and bombers and announced plans to deploy 1,500 troops to the Middle East, prompting fears of a conflict.