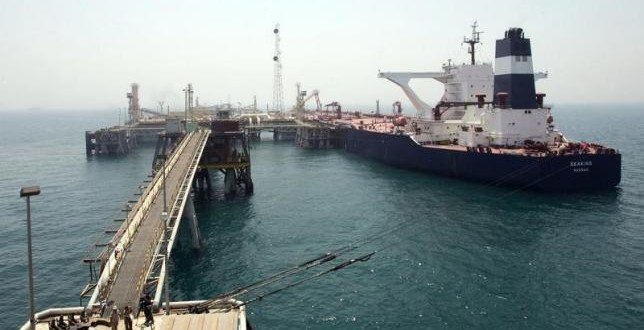 *A ship is connected to the Basra Oil Terminal, 12 nautical miles off the Iraqi coast in the waters of the Northern Arabian Gulf, close to the port town of Umm Qasr. REUTERS/Thaier Al-Sudani

07 November 2018, Sweetcrude, Lagos — Iraq will boost crude oil supply to China by 60 percent next year following sanctions against Iran by the United States of America.

Shipment tracking obtained from Bloomberg quoting the head of the state-run Oil Marketing Co., Alaa Al-Yasiri, director general of the company known as SOMO, showed that Iraq is ready to ship about 1.45 million barrels a day to China starting from 2019.

That is a huge leap when compared to Iraq’s current sales of 900,000 barrels to ten-term buyers that include state traders Chinaoil and Unipec.

SOMO’s push into China includes a deal this week to start an oil trading venture with Zhenhua Oil Co., which will be based in Tianjin. The venture tentatively plans annual sales of about 8 million metric tons — or about 160,000 barrels a day — to smaller, independent refiners known as teapots as well as large petrochemical plants, Al-Yasiri said.

The Iraqi company would predominantly offer Basrah Light crude, and plans to use the venture, which will be held equally with Zhenhua, to develop expertise beyond term deals to physical oil trading, he said.

To meet growing demand in Asia, Iraq is ready to expand shipments from the Turkish port of Ceyhan, and the company will announce its export plan for next year by the end of the month, he said. Iraq’s total exports fell to 3.83 million barrels a day in October.

“Global oil demand’s growth pillar is in Asia, with newly starting refineries mostly in Asia,” Al-Yasiri said. “This is a market SOMO values the most.”

Al-Yasiri said that expanding Iraqi output will help meet the extra demand from the region, which already accounts for 60 percent of SOMO’s sales, with 25 percent heading to Europe and 15 percent to the U.S.