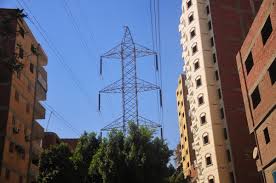 Mkpoikana Udoma
05 August 2014, Sweetcrude, Port Harcourt – About 40 youths from Ogbunabali Community in Port Harcourt City Local Government Council, this morning barricaded the Amadi Flats office of the Port Harcourt Electricity Distribution Company, PHED, over poor electricity distribution in the area.
The placard-carrying youths accused the PHED of deliberately denying them power for over a month in a bid to punish residents of the area.
Leaders of the protest, Mr. Gentle Owhonda and Mr. Chima Chinwo, told SweetCrudeReports that all effort to meet with the management of the PHED on the matter has been rebuffed.
“There has been total blackout for the past one month, the bill is outrageous, in one bedroom flat apartment, they (PHED) will give us a N15,000 monthly bill. Someone like me whose income is N30,000 a month, they will give me N15,000 monthly bill. How do I eat? How  do I  save? How do I do other things?.
‘We told them to bring the bills down, they said no. We told them since you won’t bring the bill down or give us steady power supply with the huge bill, don’t come and disconnect our light anymore. And because of that they decide to shut the whole community down and don’t want to give us light,” the leader said.
Some of the aggrieved youths, who also spoke to SweetCrudeReports, warned the management of PHED to improve on its service to the area or quit the community as the blackout had hampered business activities.
“I am feeling bad. For over a month now, there has been no light in Ogbunabali. No single sign of light. These NEPA people, or whatever they call themselves, are  punishing us,” one of them said.
Another said: “Before now, they use to give us 3 hours of supply everyday, but for over a month now, we have not seen any light. There is total blackout, our businesses are folding up because of absence of power supply”.
Meanwhile, the management of PHED, when contacted, attributed the poor electricity supply in Ogbunabli and Rivers State at large to the maintenance of its facilities across the state.
The Public Affairs Manager of PHED, Mr. John Onyi, said the exercise which commenced three weeks ago and ended last Saturday, was aimed at improving electricity supply in the state.
He assured consumers of better service delivery in the coming days.